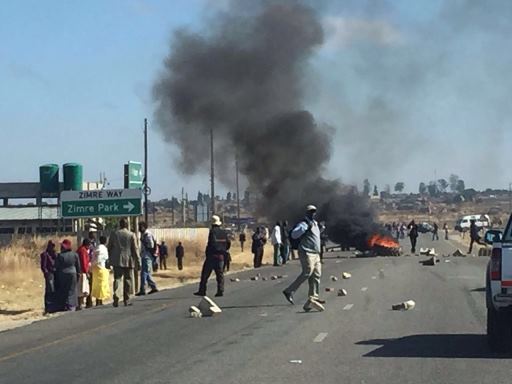 HARARE – Our News Editor Gift Phiri sits down for a wide-ranging interview with Crisis in Zimbabwe Coalition spokesperson and director Tabani Moyo about last week’s shutdown. Find below excerpts of the interview.

Q:  What is your assessment of the Shutdown in terms of its impact?

A: The shutdown, in my own assessment, was a tipping point of a citizen’s boiling tempers. It expressed a clear pointer that Zimbabwe can and or should do with a process of opening up for dialogue and debate around issues that affect itself structurally, at the economic levels and those things which define her very existence at political levels.

In the absence of a people holding regular in-depth debates and national dialogue, when given a chance, as they did in the three days under review, chances are that tempers and emotions will explode beyond expected proportions. If the government is responsive, it should take this as an opportunity to attend to the very reasons that have frustrated and angered the peoples of Zimbabwe, especially the current system of governance which has seen them poorer.

Q: Do you think it was a success?

A: This is rather a problematic question, when it is directed to the Coalition, which was more of a solidarity partner to the Zimbabwe Congress of Trade Unions (ZCTU), which called for the shutdown. Our member, the ZCTU, probably set the objectives and are in a position to better quantify and qualify the success indicators of the action.

However, from a solidarity point of view, and general point of view, the major towns were successfully shut down in the three-day period under review.

Our position regarding the action is a public manner in as far as we stand in solidarity with the organisers of peaceful and non-violent protest actions to the comatose economic situation in the country as defined by a run-away inflationary regime, failing capacity for industry and manufacturing industries, erosion of income of the citizens due to the multiple pricing regime, pegged to the United States dollar and a failing health education, service delivery and other social services nets for the bulk of the peoples of Zimbabwe.

It was, however, deplorable that some elements then took the opportunity to vandalise property, loot products in retail shops among other “isms”.

The Coalition went on to issue a strong statement against the State’s heavy-handed response to the protests, including the use of live ammunition through the deployed soldiers and police details.

This was coming hot on the  heels of the Motlanthe Commission report on the August 1, extra-judicial killings of six civilians by the army. Sadly, innocent souls were lost due to such heavy-handed approaches by the State and many left injured.

Q: Government buckled under pressure and awarded a cushioning allowance and refund of excise duty on fuel to registered firms. Can this be touted as a breakthrough?

A: That is a tokenism approach to the complex structural economic challenges affecting the country which requires a holistic approach rather than knee-jerk interventions. It does not make economic sense for example that the government effects a 100 percent increase in fuel, while on the same footing increase the salaries of doctors by 10 percent. This points to an economy experiencing multiple dislocations, which are slowly grinding the centre to a halt.

Our economy is broken, there is need to invest in manufacturing and industry, modernise our agriculture, re-position our institution of higher learning into modern-day machinery of innovations and inventions among others.

Q: You have been accused of organising this shutdown through meetings you allegedly held at Wild Geese Lodge. It’s alleged you later convened another meeting in Belvedere. Is this correct?

A: The coalition has already pronounced itself on this matter with clarity. Crisis Coalition held a one-day meeting on December 3 to discuss the role of CSO (civil society organisations) in transitional justice and setting the framework for national dialogue. From the 4th to the 6th, the organisation was on a strategy reflection meeting which feeds towards its strategic plan document.

This is done annually, around the same time since our formation as an organisation. The organisation did not hold any meeting in Belvedere, we only read it in the State-owned newspapers such as The Herald and the Chronicle and recently in statements by the government. I have been repeating this reality, but out of malice, the State media and the government are ignoring these clear facts.

Q: What did your meetings exactly discuss? May you go into detail?

A: As outlined above, the first day it was about transitional justice and taking steps towards defining the framework for national dialogue. The last three days were strategic planning reflections, which we traditionally engage in outside elective general meetings.

There is nothing criminal for organisations, registered in the country, to regularly hold internal meetings, as this is provided by the Constitution of the Republic. One of the resolutions of the meeting was that we should proceed to hold a National People’s Convention (NPC) which draws from the women’s movement, students, churches, media, business, farmers and people living with disabilities so that they make their key demands on the issues that form the agenda for a national dialogue process.

These are the partial remedies to issues confronting and knocking our socio-political and economic order at the moment, which if supported by the government, will be a step towards lasting solutions. Sadly, such actions and undertakings are demonised and branded subversion. The government should never forget that the vision of the Coalition is to see a democratic country.

Q: Did you co-ordinate with ZCTU and #ThisFlag in these protests?

A: You are actually identifying the organisers in your questioning! In our entire deliberations in early December, we never planned of organising or co-ordinating protests. The so-called January meeting, was definitely not a meeting of the Coalition.

The only way to know who the actual conveners of the so-called Belvedere meeting is the government, reverting back to its notes and making a public clarification on how it erroneously attributed another organisation’s meeting to the Coalition.

The State might just as well apportion blame to the Coalition for the clumsy way they handled the doctors’ strike. The teachers were also on strike recently, but rather the government has opted for the easy route of blame-shifting rather than attending to the demands of the citizens.

Furthermore, evidence before the courts shows that actually members of the ruling party were also implicated in the burning and destruction of State property such as a Zupco bus and (former Information minister Webster) Shamu’s service station. These are stubborn facts at hand which could easily be verified before going on a propaganda overdrive, which can be an embarrassment to the government that wants to be taken seriously.

In essence, the statement produced by the ruling party, through its spokesperson Simon Khaya Moyo, was more rational and firmer compared to the one produced by the State, which attributes the source of the protects as the Crisis Coalition meeting in December. In his response to the shutdown, SK Moyo attributed the protests to the failing economy and outlined that the citizens were justified to protest, in as far as they were doing it in a peaceful manner.

Q: Do you have any association with so-called Democratic Resistance Committee and The Vanguard, both alleged MDC outfits?

A: The Crisis Coalition is a conglomeration of 82 civic organisations which are working in the areas of governance and democracy. We are not affiliated to any political party. Again, the government is mixing up its intelligence. We are not in any way working or have any knowledge on the workings of the MDC structures.

Q: What’s your comment on the high-handedness with which the State put down the protests, five said to have been killed, scores shot, and many netted in a dragnet arrest after door-to-door raids?

It has become predictable that the government has a reflex of being disproportionate in their response to citizens expressing their views.

The use of live ammunition is dangerously gaining traction in this country against regional and international norms of handling riotous situations. The Coalition expresses its heartfelt condolences to those who lost their loved ones out of this rather deplorable approach in handling crowds.

Q: Do you think the grievances are genuine, given that this was all sparked by an over 100 percent hike in the price of fuel?

A: As I noted in my introductory remarks, Zimbabwe has been bottling up for a long time, without finding the venting point. The fuel increases are just but a trigger moment. Remember, we are heavily taxed; cost of living is sky-rocketing with the three-tier pricing mechanism wreaking havoc in the economy; failing health system; challenges with accessing clean water and poor service delivery among other key factors that led to the citizens to shut down the country.

Q: Zanu PF has characterised all this as “economic sabotage.” Do you share that opinion?

A: That’s an unfortunate pronouncement, which entails that the party is not a listening party which does not have mechanisms to absorb feedback from its citizens. If the citizens are no-longer affording basic commodities and services they have the right to petition their government.

Q: How do you think this unrest can be resolved given that talks under the tripartite negotiating forum have dismally failed?

A: As the Coalition, we held our December 3, 2018 meeting with the hope that we stimulate debate on a framework for national dialogues. You saw the results for such proactive thinking! That we are saboteurs, for daring to think ahead. An inclusive national dialogue process among all key stakeholders is the panacea to this crisis at hand, rather than scapegoating and stocking temperature on narrow interest positions.

Q: And labour is pushing for US dollar salaries. Is this doable?

A: The economy is now an elite economy, which is “rated” at the going USD value for every transaction. This entails that we are valuing our goods and services at USD value. The major shift to avoid an elite USD rated economy, is to stock up gold reserves and introduce a gold-backed currency and the discipline to maintain the gold reserves.

Q: It seems this is a currency problem. What do you suggest on the currency front, dollarisation, Rand Monetary Union, demonetising bond notes?

A: It is not the currency crisis alone, but failing production. We are not producing to earn the money. Hence the need to go all the way in investment on manufacturing and industrial capacity utilisation, value adding our products in agriculture and mining as the major foreign currency earners. When you have economic growth in real terms, it creates jobs and opportunities for the economy to sustain itself and leap into orbits of sustainable growth.

Q: How is your conglomeration of civil society groups helping in all this?

A: We are a think-tank geared towards stimulating conversations around the national economy, unlocking the political gridlock through a national dialogue policy framework. In addition, we strongly believe that Zimbabwe has various capabilities at resource level, human capital and environmental factors for success, what is required is agile, innovative and competitive leadership to define a path that unites the country in re-building bottom up.

Q: Do you believe there is a political solution?