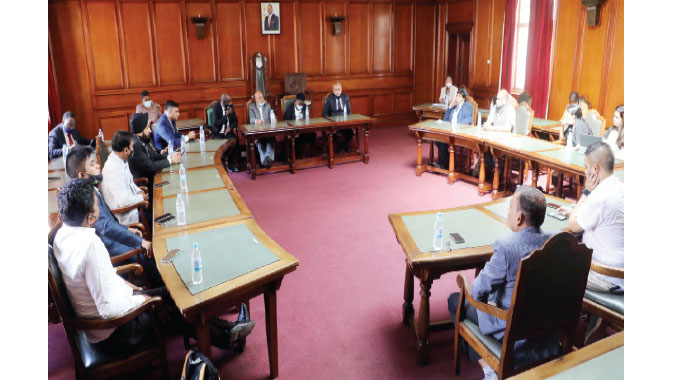 The delegation who arrived in the country last week on Tuesday, is from the Indian Economic Trade Organisation (IETO) and being led by the organisation’s president Dr Asif Iqbal.

The delegation’s tours were facilitated by the Zimbabwe India Trade Council which was formed to forge Investments between Zimbabwe and India.

Speaking during a briefing with the Minister of State for Bulawayo Provincial Affairs and Devolution Cde Judith Ncube and the Deputy Minister of Industry and Commerce, Cde Raj Modi in Bulawayo on Friday, Ambassador Khanduja said they were pleased to learn that Bulawayo had vast opportunities for Indian Investors.

“This group of investors from various sectors have come to seek opportunities and officially launch the Zimbabwe India Trade Council in Harare and on 5 May will sign many Memorandum of Understanding (MoU) with various organisations.

“Bulawayo has presented the delegation with various opportunities to invest in sectors such as infrastructure development, tourism, arts and culture, media, health, business, agriculture, manufacturing and mining among others,” he said.

He also noted that with Bulawayo being once a commercial hub they were pleased to forge investment ties with Zimbabwe. Cde Ncube said she will link the investors delegation with various Ministries so that they can engage on various investment opportunities, as the city works on reviving it industries.

“We want to come up with new approaches to the industry, therefore as you heard that they are coming from different sectors we want to revive, strengthen and grow our economy. We need to grow our Gross Domestic Product as a province and as a country as well, so that we are the same level with other neighbouring countries within the region.”

Cde Modi said his Ministry was ready to assist the investors with providing the adequate information and taking them through the procedures required for the various sectors they had interest in. Meanwhile, India Urbane Design Company founder and director, Ms Jumana Gandhi who is also an architect and interior designer in urban planning said they were pleased with Bulawayo’s “A Smart City Concept” and were keen to partner in infrastructure development.

“There are very interesting things that came up, one was housing and town planning. It is my core area because l am a designer in an architecture company and we have a pool of designers back home in India who will be very keen on investing in Zimbabwe. There were opportunities for hotels and restaurants which is a very interesting proposition for us. While, the other delegates area also keen to explore interesting opportunities in mining and farming,” she said.

Zimbabwe and India share cordial relations and the Asian country has assisted the country in various sectors that include health, science and technology development and scholarships. India has also donated significantly to the country’s efforts to fight Covid-19.