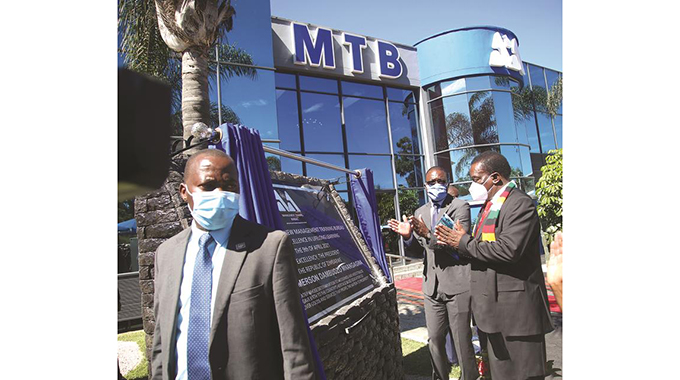 President Mnangagwa is joined by Higher and Tertiary Education, Innovation, Science and Technology Development Minister Professor Amon Murwira in applauding the unveiling of the plaque to mark the official launch of the new Management Training Bureau (MTB).

ZIMBABWE is poised for a brighter future with institutions of higher learning set to drive the economy through industrial and innovation parks that will inevitably bolster the modernisation and industrialisation agenda, President Mnangagwa said.

However, the President said there is need to address the skills gap, which stands at more than 60 percent, according to a 2018 National Skills Audit which revealed a huge deficit in natural and applied sciences.

He commended the Management Training Bureau (MTB) for rebranding saying this will unlock human capital and skills development, which is an integral component towards achieving the National Development Strategy 1 and ultimately attaining Vision 2030 to become an upper middle class economy.

“Our institutions of higher learning remain seedbeds for innovative ideas, inventions and the hallmark for our nation building, growth and development. I thus applaud the sector for heeding my call to set up innovation hubs and industrial parks to bolster our modernisation and industrialisation agenda.

“The future is indeed brighter and our economy is steadily growing through cross-cutting and responsive development interventions which leave no one and no place behind. I therefore invite stakeholders in the public sector, industry and commerce and civil society organisations to fully utilise this revamped and refocussed Management Training Bureau,” President Mnangagwa said.

On the skills gap, President Mnangagwa said the 2018 National Critical Skills Audit revealed that despite a high literacy rate of 94 percent, Zimbabwe had 38 percent skills available, leaving a huge gap.

He commended the MTB for introducing international languages such as Chinese, Russian, French, Portuguese, Swahili, English among others but implored the institution to consider Arabic which he said had also become integral in business and investment. President Mnangagwa said the importance of versatility in languages came out on Thursday during a Sadc Troika meeting aimed at discussing insurgency in Mozambique where the meeting of Heads of State and Government  came to a standstill after one of the participating leaders spoke in his national language, Swahili.

“Yesterday when we were in a meeting in Maputo, the President of Zanzibar, President (Hussein) Mwinyi addressed us in Swahili, so the conference came to a standstill because we did not understand what he was saying. We had to persuade him to speak in English and he is a graduate, you can see the pride they have for their own languages,” said President Mnangagwa drawing laughter from the floor.

As such, the President said there is a need to have Zimbabweans who speak all these foreign languages to penetrate foreign markets.

“I have noted you have left out Arabic, the United Arab Emirates is a growing market and if you need to penetrate that market we need to have students here training in Arabic and you will beat those countries who go there with a chain of interpreters,” he said.

President Mnangagwa said he was delighted when he was told that the cost of restructuring MTB was only 20 percent of what the country would have paid to get skills from other countries.

He implored students to practise academic freedoms and liberties, responsibly to safeguard and promote peace, national unity, culture and heritage.

President Mnangagwa said he directed that there be introduction of innovation hubs at all universities and institutions of higher learning.

Earlier on Higher and Tertiary Education Innovation Science and Technology Development Minister Professor Amon Murwira said the Government has come up with an education system that would see people getting out of hunger and poverty through the leadership of President Mnangagwa. The President has a feel of the recently refurbished and renovated MTB’s auditorium in Msasa, Harare, yesterday. – Pictures: Believe Nyakudjara.

“Once a nation has decided and is able to build its own things, make its own things, think its own way, nobody and nothing can stop that nation. This is the hallmark of mental sovereignty which is the mark of a liberated people at peace with themselves and at peace with the rest of the world, building their own country and taking their own destiny in their own hands,” said Prof Murwira.

Defence and War Veterans Minister Oppah Muchinguri-Kashiri commended President Mnangagwa for his vision that inspired universities, colleges, including MTB, to produce goods and services for the good of the country.

MTB director, Mrs Nancy Matshe gave an overview of the new-look institution including areas of training they will be providing to contribute towards Vision 2030.