‘Insects are cheap source of protein’ 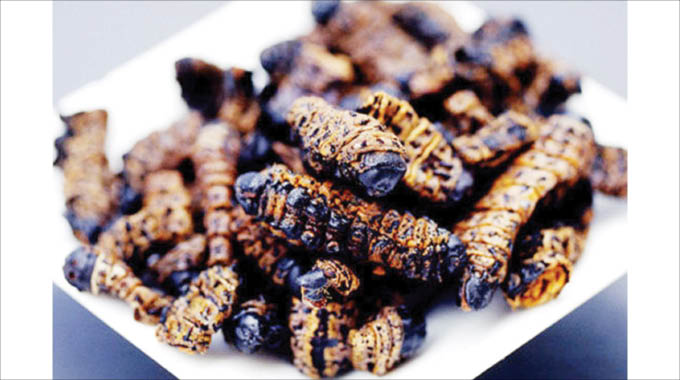 ZIMBABWEANS should consider eating insects such as locusts as they are a cheap source of protein compared to beef, a study has revealed.

Mr Dexter Changwena, a researcher and nutritionist in the Ministry of Health and Child Care who took part in the Protein Quality of Commonly Consumed Insects in Zimbabwe study form 2015 to 2017 which was published in the African Journal of Food Agriculture Nutrition and Development last month, said the study was motivated by the number of children in Zimbabwe who suffer from under nutrition with lack of protein being a leading cause.

“In Zimbabwe we still have many children who suffer from under nutrition, mainly energy and protein deficiency malnutrition. Preventing these cases of protein deficiency has always been a challenge because in most cases, protein-rich diets — the often prescribed solution are usually expensive.

“The cheaper alternative sources for some rural communities include edible insects and these have not been thoroughly investigated. This motivated us to conduct this study where we evaluated protein quality of edible insects commonly consumed in Zimbabwe and other African countries,” he said.

The study looked at the protein content of three edible insects, Locusta migratoria (locust) which came out with 71 percent crude protein rate, Imbrasia belina (mopane worms or amacimbi) which had 51 percent and Encosternum delegorguei (stink bug) stood at 31 percent.

Mr Changwena said this showed that the edible insects were quite high in protein content.

“Protein quality is an important marker of the value of a dietary protein and we know that animal protein is of high quality that is why animal foods are mainly recommended as a good protein source.

“In our results we found that protein quality of these three edible insects was comparable to that of casein, a known high quality animal protein,” he said.

The research also noted that protein digestibility of the three insects which were under study was high and comparable to that of casein found in animals.

“There was no significant difference in protein digestibility between the three insect protein sources and casein. The results showed high protein quality of three edible insects commonly consumed in Zimbabwe comparable to casein, a high quality animal protein. High protein digestibility of edible insects indicated ease in absorption and improved utilisation in the body,” he said.

According to Mr Changwena, identifying good alternative protein-sources to animal meat that contribute to improved health and prevention of malnutrition is very key.

He said considering that protein-energy malnutrition is still prevalent in many African countries, and can be prevented by edible insects which are vast in these countries, policy makers need to look into this issue.

“This kind of study results juggles up the minds of policymakers into thinking of ways to ensure increased production and consumption of edible insects in development and rural settings. This is a cheap alternative protein source to animal protein. Beyond livestock and small animal production, one can see edible insects farming as a solution that African countries need.

“That is why policymakers should care about these study results. If they create that conducive environment with relevant policies to promote production and consumption of these edible insects, improve our diets and making them diversified, we will eradicate these nutrient deficiency diseases we continue to face,” said Mr Changwena.

The research reveals that protein from edible insects will contribute immensely to food security of developing countries such as Zimbabwe and other sub-Saharan African countries. Edible insects are vast in these countries and already being consumed by many people. Increased production and consumption could alleviate protein deficiency in the countries.

There is also a need to incorporate edible insects in modern food and develop modern recipes and foods derived from these insects to improve consumption and acceptance by the young generation. That way, edible insects will play a key role in food security of Zimbabwe and other sub-Saharan Africa countries.

The human practice of consuming insects as food (entomophagy) is very common in many parts of the world especially in resource limited countries. It is estimated that approximately 2 billion people worldwide eat insects as part of their normal diet.

In Zimbabwe, entomophagy has been reported as a common practice in both rural and urban areas in the country.

The research further states that food security is dependent upon food availability, accessibility, and utilisation by the body for energy and health purposes.