For many the nightmarish prospect of enduring the next five years under a Zanu PF administration are just too galling to contemplate and nowhere is this more apparent than in the streets of Harare where posters of Mugabe and Tsvangirai remain defiantly reminding all and sundry that Zimbabwe had a chance to decide its destiny on July 31.

For many, a Zanu PF victory just does not make sense, they accuse the 50 year old party of being too old and exhausted, of ruining the economy and driving millions of brothers and sisters into exile. 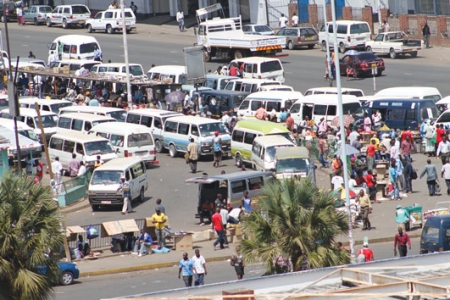 The questions many are asking include how can a party that destroyed the homes of close to a million people’s in 2005 at the height of the winter season, win an election in Harare?  The memories of a gory and horrible 2008 are still fresh in many people’s minds, and yet the same government that brought that upon them sees no contradiction to the logic of a landslide victory.

Crestfallen and with sunken spirits Zimbabweans recall the long winding queues for almost everything from gasoline to basic commodities such as salt just a few years ago—and none would like a return.

Since Thursday morning when results of the general elections began to filter to Zimbabweans in Harare, people have are walking about like zombies, drowning in dark shadows of pain and disbelief.

Buts it’s real, with the prospects of a Zim dollar return under Mugabe, now growing larger.  During his campaign the 89 year old strongman indicated that he wants the country to reintroduce its own currency that was defaced by runaway inflation in 2009.

We will never forget the cholera outbreak in 2008, which claimed over 4000 people under Mugabe’s regime.

As results trickled in none from either side, vanquished or victor, celebrated as people in hushed tones asked just how Zanu PF could win with a landslide when just four years ago it was on the brink of sinking into oblivion.

In commuter omnibuses, among vendors and even at functioning hospitals (they were closed in 2008) there is a palpable sense of dismay and dejection.

via It’s a nightmare… | Sokwanele.