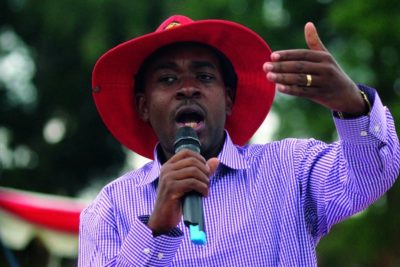 UNDER-FIRE MDC Alliance leader Nelson Chamisa yesterday said he was unfazed by the relentless attacks from fellow opposition MDC-T leader Thokozani Khupe and the ruling Zanu PF party, declaring his party was geared to come out stronger after the storm.

“We represent the new and coming. We carry the seed of new beginnings. Not even the angel of death can prevent its sprouting. We sympathise with those who attempt to stand in the way or are opposed to us. It’s game on!” Chamisa said as Khupe continues piling more misery on the youthful opposition leader by recalling his elected MPs and councillors.

On Saturday, Khupe went for the jugular, declaring that she had rebranded and taken over as MDC Alliance leader, creating more confusion in the opposition camp ahead of by-elections set for December this year.

The Khupe-led faction said it would use the name MDC Alliance when filing nomination papers on October 9 for by-elections to be held before December 5.

Chamisa contested the 2018 presidential race on an MDC Alliance ticket, losing to President Emmerson Mnangagwa by a small margin.

Khupe, who contested under MDC-T, came a distant third with 45 000 votes.

Chamisa yesterday said he would circumvent the political barriers thrown at him.

“We will do the opposite of what our opposition, cynics, critics and naysayers expect us to do,” he said.

Party spokesperson Fadzayi Mahere said the party had deployed to the grassroots to consult on the way forward.

“As a people-driven party, the national executive council mandated the leadership at various levels to consult stakeholders, opinion leaders, grassroots structures and party organs countrywide on the multiple options that are available to it,” she said.

“We have today (yesterday) deployed teams that have started consulting our branches throughout the country on the direction that the party must take. The teams will also consult opinion leaders, churches, traditional authorities, civic society, workers and students,” he said.

Hwende said the ruling Zanu PF party and the MDC-T had connived to decimate Chamisa’s party, but both parties have denied the charge.

But Chamisa’s party insisted it was disturbed by “Zanu PF-driven threats” to the MDC Alliance, the unlawful arrests of its members, the “unlawful recalls” among other issues.

On mediation by the South African ruling African National Congress party, the MDC Alliance said the move was welcome, but pleaded with Sadc and the African Union to intervene urgently before the crisis engulfed the region.

“The party notes the efforts of South Africa and the ANC facilitating of a resolution of the national crisis,” Mahere said.

The ANC recently dispatched two delegations to Harare, but were refused permission to meet other stakeholders outside the ruling Zanu PF party.

The ANC officials were also accused of buying into the opposition narrative of a country in a crisis, but they have stood their ground indicating they would soon come back for separate meetings with the MDC Alliance, United States ambassador to Zimbabwe, Brian Nichols and Transform Zimbabwe leader Jacob Ngarivhume, among other key stakeholders.