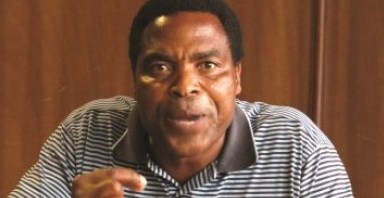 BULAWAYO – There is renewed vigour and hope in the Zanu PF Bulawayo provincial structures after firebrand war veteran Jabulani Sibanda was recently readmitted in the party.

Sibanda, who has been conspicuous by his silence, and kept the nation guessing about his political career despite the departure of former president Robert Mugabe’s government which had turned his life into “hell”.

Even after his re-admission, the combative former war veterans’ leader has chosen to maintain his silence telling this publication that he will speak when time is ripe for him to do so.

The controversial politician has been maintaining a low profile since he was deposed as leader of the Zimbabwe National Liberation War Veterans Association (ZNLWVA) in 2014 for being discourteous to the then first family.

He was then expelled from the party.

For his alleged transgressions, he was arrested and hauled before the courts.

Zanu PF Bulawayo secretary for information Christopher Sibanda this week welcomed the re-admission of Sibanda, saying his readmission to the party is “worth celebrating” since “for example he has noteworthy mobilisation strategies”.

“We are happy in that we can now engage Sibanda for advice without fear, whereas in the past it was difficult to be seen associating with him lest we are also labelled rebels and be expelled from the party,” Sibanda said.

“We are happy about the development, we are happy for him that he is now a member of the party and we definitely need his expertise on, for example, mobilisation strategies.”

Sibanda further noted that now that the former war veteran was back in the fold, they will obviously start engaging him for his experience.

Since his withdrawal from public life, Sibanda retreated to being a full time farmer in Nyamandlovu where he has also refused to entertain journalists.

At one point, Sibanda was linked to former vice president Joice Mujuru’s Zimbabwe People First (ZPF) before its split.

Since then, many opposition parties unsuccessfully tried to lure him into their parties as they visited his home in the city.

The outspoken Sibanda is credited for organising Zanu PF’s first one million-man march in 2007 in solidarity with Mugabe as well as unleashing terror in Masvingo around 2011.