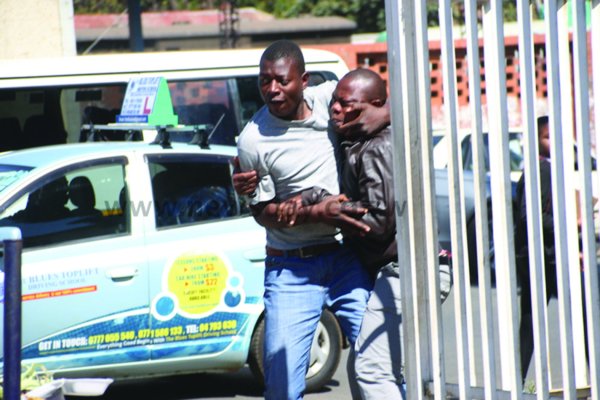 JOURNALISTS based in Harare yesterday petitioned city fathers and the Zimbabwe Republic Police (ZRP) to register their displeasure after the police threw teargas into the newsroom of an online media house, 263Chat, on Thursday last week.

Journalists, mainly from privately-owned media houses and freelancers, wanted the law enforcement agents to give them space to do their work without interference or harassment.

The mayor promised that their concerns would be addressed after municipal police officers teamed up with ZRP to attack a journalist who had filmed their violent ejection of vendors from the central business district on Thursday last week.

At Harare Central Police Station, the petition was handed over to senior police officers, although the journalists struggled to be accommodated.

Journalist Tawanda Karombo said they wanted to engage and get a guarantee of protection for practising journalists.

“This follows the harassment and attack, including firing of a teargas canister into the newsroom at 263Chat,” he said.

“We wanted to make sure we bring this to the attention of the mayor and to also get his affirmation and commitment to restraining municipal police and to ensure that justice is ultimately served under the circumstances.

“The municipal police did this brutal attack in the company of ZRP, hence, we proceeded to Harare Central to seek audience and to show our displeasure and disgust with the manner police have been treating journalists on duty and this is not restricted to the sorry occurrence last week. It has happened before and we have previously presented petitions to the police.”

Xolisani Ncube, from NewsDay, said journalists need to work in an enabling environment.

“We just need to ensure that we find each other. We want to be effective in covering news and, therefore, all impediments must be cleared. This is engagement and I am happy that our petition was accepted. The next step is to hear from them on how they will address our concerns,” he said.

263Chat news editor Thomas Madhuku told NewsDay that the petition was meant to right wrongs after years of suffering from police harassment.

“Our petition was informed by the need to correct some wrongs that have been ongoing. The police have, for some time now, attacked journalists for taking pictures or videos of their operations in the CBD,” Madhuku said.

“Most of the time, it happened even when journalists identified themselves. So the idea was to take our grievances to their bosses so that we can work together amicably. Police brutality has been ongoing for some time and we felt we needed to take it up to the relevant authorities.”

In the petition, the media practitioners said they were not happy with the manner they are caught up in ensuing melees in Harare whenever they were covering disturbances.

“A police report was lodged and visual evidence of the attacks is available to assist the police in their investigations on this matter. To our knowledge, no arrests have been effected at the time of the submission of this petition to your esteemed offices,” the petition read.

The journalists said they had the right to cover police operations provided they did not interfere with the officers’ work.

“The firing of teargas canisters into the occupied offices of 263Chat cannot be reasonably justified under whatsoever circumstances,” the petition read.

“We, therefore, urge you to conduct thorough investigations into this shocking incident as a matter of urgency and thus assure the safety and security of journalists undertaking their lawful professional duties as provided for in the Constitution.”