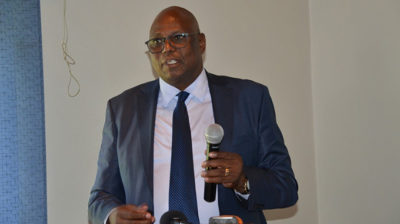 Mutevedzi, who was the deputy secretary for legal services was doubling up as acting Chief Magistrate for the past year after the suspension of Guvamombe.

“Yes that’s the new development. He has been appointed to that position,” Nkiwane said, but did not reveal more details.

Guvamombe was arrested in January last year on charges of criminal abuse of office.

The charges against him stemmed from a decision to offer work-related attachment to two former Cabinet ministers Saviour Kasukuwere and Supa Mandiwanzira at the Harare Magistrates Court when they had pending criminal cases.

He was also facing allegations of interfering with a magistrate involved in a matter in which he allegedly had interests.

Kasukuwere and Mandiwanzira were law students at the University of Zimbabwe.

Guvamombe resigned after 35 years of service.

In 2012, he was appointed the substantive Chief Magistrate, a position he held until 2019 when he was suspended on allegations of abuse of office.

Prior to his appointment as Chief Magistrate, Guvamombe was the provincial magistrate in charge of Harare province, a position to which he was succeeded by Mutevedzi, before his elevation to deputy secretary for legal services.

In January the State dropped criminal abuse of office charges against Guvamombe before plea and said it will summon him for trial.

This was after it had failed to indict him at the High Court.

“The State is withdrawing charges against the accused before plea and it will be looking at the indictment papers. He will be summoned to court when the State is ready to indict him,” said the State led by Constance Ngombengombe.