HIGH Court judge Justice Moses Foroma has recused himself from handling an urgent chamber application filed by Justice Erica Ndewere, who has vowed to fight Chief Justice Luke Malaba’s move to have her investigated over alleged misconduct. 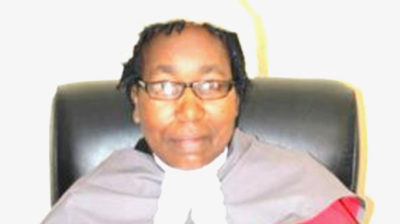 The move by Justice Foroma followed a complaint raised by Justice Ndewere’s lawyer Beatrice Mtetwa on the question of impartiality of a sitting judge to preside over a matter involving a fellow judge.

Mtetwa confirmed the latest development saying she was engaging the office of the Judge President, Justice George Chiweshe, to secure the services of a retired judge.

“Yes, Justice Foroma recused himself from the matter and we are now in the process of writing to the Judge President to find us a retired judge to handle the matter,” Mtetwa said.

Justice Ndewere is facing allegations of gross misconduct in the performance of her duties, but she is accusing the head of the Judicial Service Commission (Chief Justice Malaba) of interfering with judges’ determinations.

Justice Ndewere poured her heart out in an urgent chamber application filed last week in which she is seeking an interdict to halt the setting up of a tribunal by President Emerson Mnangagwa to investigate her conduct as a judge.

She said she was being victimised for refusing to comply with the said unlawful order, adding that the allegations were false and malicious and were calculated to compromise the independence of the Judiciary.

Justice Ndewere further said the setting up of the tribunal against her violated her right to administrative justice, equality before the law and right not to be treated in an unfair and discriminatory manner.