Welcome to NewsDay’s coverage of today’s events. Zimbabwe is going through its worst economic crisis in a decade and opposition and civic groups have called for protests against corruption by President Emmerson Mnangagwa’s administration. Yesterday, security forces and anti-riot police cleared people off streets of the capital Harare and in major cities and towns across the country. The also forced shops to close. Our reporters around the country provide up to the minute updates. 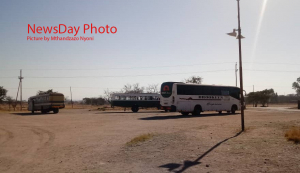 • Cities around the country are deserted. Police and soldiers are turning away people trying to go to work. In Bulawayo, the central business district is deserted, with most shops and banks closed. Zupco buses have no passengers to carry. 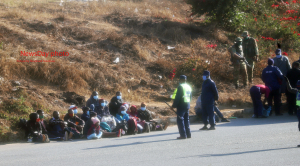 • Blessed Mhlanga reports that police and soldiers have mounted roadblocks along the major highways into Harare. No cars are being allowed into Harare’s CBD. Security forces have mounted a major road block at Mbudzi roundabout. Shops in the High density are open although there is heavy police presence.

• Our reporter in Masvingo Tatenda Chitagu reports that the situation is tense, the CBD is deserted but major shops open. In the high density suburbs, shops are open and a few people are outdoors.

• Moses Mugunyeki reports that soldiers have been deployed at most shopping centres in Chitungwiza’s Zengeza and St Mary’s suburbs. The situation is tense around Huruyadzo Shopping Centre, which is a stone’s throw from the home of opposition MDC Alliance’s vice national chairperson, Job Sikhala. Most people and vendors have stayed indoors.

• In Chivhu, Miriam Mangwaya reports that most small retail shops are closed, with heavy police presence on every street and at entrances of every opened retail shops.

• Vanessa Gonye reports heavy police and military presence in Domboshava and Hatcliffe, with members of the army chasing people from Mungate Shopping Centre. There are reports of beatings earlier for those attempting to go to the shops.

• Kenneth Nyangani reports from Mutare that movement now in the high-density suburbs is restricted as armed police and soldiers are roaming the streets. Fearful residents have been told to stay indoors. Police have set up roadblocks at shopping centres in high density suburbs. 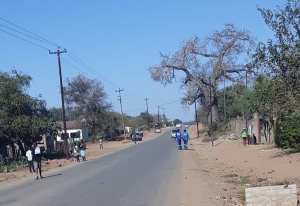 What protests? People in Chiredzi going about their normal business

• In Chiredzi, Garikai Mafirakureva reports that It’s business as usual, without any incidents except for eight people who were arrested at a birthday party last night around 11pm. In the CBD, most shops are closed.

• Brenna Matendere filed this report: In Gweru, the central business district is deserted. Fast foods outlets, Chicken Inn & Bakers Inn as well OK and Pick n Pay as supermarkets have been ordered to close by police early in the morning. They reopened after intelligence officials intervened. In Mkoba, armed police and army have sealed both ends of a dusty road in Mkoba 13 which leads the house of MDC Alliance Organising Secretary Amos Chibaya. At Mkoba 12 turn-off near Mkoba Teachers College there were some soldiers an army truck who were singing liberation songs loudly since morning to around 9:30 which terrified residents.

• Nhau Mangirazi reports from Karoi that the army and police have ordered grocery shops to close as their members, armed with tear gas canisters patrol. He adds: There are reports of civilians being assaulted in Chikangwe Ward 6. Residents were being beaten despite being in their yards. It is the same Ward whose councilor Kudakwashe Chigumo was abducted by State security agencies and was only released following intervention by Zimbabwe Lawyers for Human Rights member Unite Saize late on Thursday night.

• Zerubabel Mudzingwa reports that there is no business activity in Mutare, Nyazura and Rusape, with heavy presence of police, army along the Harare-Mutare highway. There are a few shops open in Marondera but no customers

• In Gweru, Matendere reports that police have now chased newspaper vendors off the streets.

• The situation is calm in Glen View, Harare, reports Andrew Kunambura, with the police patrolling the main roads and shopping centres such as Makomva and Tichagarika. A few vendors have started to sell their merchandise at roadside stalls. The popular furniture manufacturing complex is closed.

• At Magwegwe North in Bulawayo, all shops are open, with six police officers patrolling the area. No soldiers in sight, reports Mthandazo Nyoni. 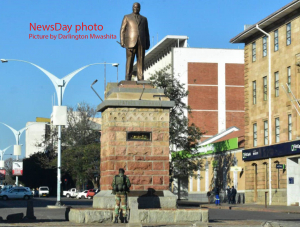 • Here is Tafadzwa Kachiko reporting from Chitungwiza: The security forces occupied the known hotspots: St Mary’s, Zengeza 2, C Junction, Unit L, Makoni. Some shops are open and a few vendors are at their stalls since around 9am. At Makoni Shopping Centre there are armed soldiers and police officers. Small shops are closed, OK, TM, Baker’s Inn are open. Security forces are also at Unit L shops. Soldiers reportedly beat up people at Zengeza 5 corner shops and ordered them to stay home. There is a heavy presence of soldiers and police officers in Zengeza 2. At C-Junction, there are about 15 armed anti-riot police officers who are just seated. They’re not stopping cars. In St Mary’s and Manyame, soldiers and the police are just patrolling.

• Simbarashe Sithole reports from Bindura that the Aerodrome area streets are empty and shops are closed as people stay indoors.

• Tsitsi Dangarembga says has been arrested while demonstrating in Borrowdale, reports Moses Matenga

• Here is a message from the police: ZRP wishes to advise the public that the security situation in the country is calm and peaceful. The public should continue with normal day to day activities with the full knowledge that their safety and security is guaranteed.

• Stephen Chadenga reports from Gweru that yesterday at the close of business, residents from distant suburbs as Mkoba had to walk home after the army and police ordered Zupco buses and kombis to stop carrying commuters. 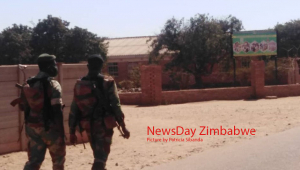 Soldiers patrol in Nketa 9 in Bulawayo

• Here is Nhau Mangirazi with more: In Kariba resort town, Mayor George Masendu confirmed that many of MDC Alliance activists were forced to take a back seat on 31 July protest as they have been targeted individually since Wednesday. “Majority of our activists were forced not to take part in the peaceful demonstration as they were visited by State security agencies including police, army and members of Central Intelligence Organization since Wednesday. This has forced them not to come out into the streets. Generally, the situation is calm and am at home and have not heard any complaints so far,” said Masendu in a telephone interview by Friday midday.

• An MDC councillor has told NewsDay that in Goromonzi, soldiers and police with dogs have ordered the closure of shops. Meanwhile some residents reported that it was business as usual with no incidents of brutality.

• Vanessa Gonye gives this update from Domboshava: At 6:30 today, soldiers pounced on people who wanted to travel to town at Masikandoro turnoff (pa Durawal) and beat them up, ordering them to go back home. Some took refuge at a funeral in the area. Other were not so luck and were caught and loaded into an army truck. At Mverechena shops a truck of soldiers ordered the shops to close but another group later came to order them to reopen.

NO PASSENGERS – A fleet of Zupco commuter omnibuses parked today at Zupco Northern depot in Mutare.

• Jairos Saunyama reports that in Marondera town, some of the security details manning roadblocks into CBD have left. CBZ Marondera is open but no tellers inside.

• MDC Alliance’s Jameson Timba said the protests were successful in showing up a government is demonstrating its fear of the people. “This is shocking but we are aware that they are targeting MDC Alliance leadership. It’s a sign of a desperate regime,” he told NewsDay.

• Here is Veneranda Langa with an update: MDC A’s MP for Binga North Prince Dubeko Sibanda says people in Binga were ready to go to the streets but refrained after heavily armed soldiers and police started patrolling around business centres. As a result, people are now holed up at their villages and are not moving around. “People have remained in their villages in fear. But I think the citizens have sent a very strong message to the government that they are ready to take back their power.” Sibanda said. 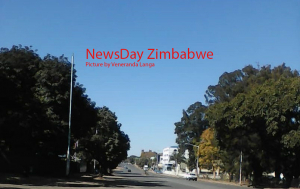 Herbert Chitepo Avenue in Harare which on a normal working day would be bustling with heavy traffic.

• Simba Sithole reports that Bindura town is deserted, with heavy police presence the only sight. Even vendors are nowhere to be seen.

• A person living with disability, Henry Chivhanga has been taken by police and soldiers from Craft Centre in Masvingo, his son Wilson confirmed.

Henry Chivhanga, a person living with a disability makes his feelings known 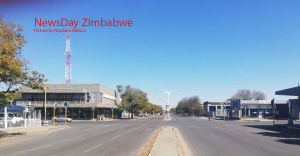 • Here is Miriam Mangwaya reporting from Chivhu: Armed soldiers and police with dogs have started going around the CBD retailers to close shops. Armed police are also moving around residential areas ordering people to stay indoors. 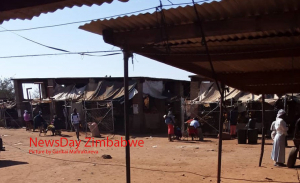 Despite the army and police patrolling the streets of Tshovani in Chiredzi, are out in full force

• Garikai Mafirakureva reports that vendors are ignoring the presence of security personnel and selling their wares. The situation in the town has remained largely calm. 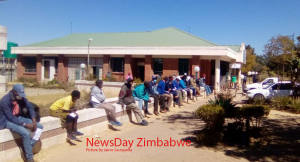 • Jairos Saunyama reports that some tobacco farmers are stranded at Agribank Marondera. They had come to collect their money but found the bank closed.


• Lorraine Muromo reports that in Msasa Park, vendors and tuckshop operators are playing cat and mouse with police and soldiers, running away and closing shop as soon as the armed police patrolling the area are in sight.

• Here is what the Global civil society alliance CIVICUS had to say about today’s events: “Global civil society alliance CIVICUS stands in solidarity with Zimbabwean activists and condemns the targeting of civil society leaders and journalists after unprecedented levels of violence in the run-up to planned protests scheduled for 31 July 2020.
“The military has declared protests against the worsening economic situation “illegal” and has militarised the streets, closed businesses and limited movements of people. Many civil society leaders are being monitored by the authorities and the families of others are being held by the police.
“The targeting of activists and civil society leaders intensified after the arrests of journalist Hopewell Chin’ono, and protest leader and head of Transform Zimbabwe Jacob Ngarivhume on 20 July.
“The level of barbarism we are seeing under the current regime in Zimbabwe is symptomatic of the darkest days of the previous regime. The Zimbabwean authorities have clearly panicked in the run-up to planned protests. They have unleashed a campaign in the hope of silencing journalists and activists and forestalling demonstrations. The African Union and South Africa should condemn these abhorrent actions,” said Paul Mulindwa, Advocacy and Campaigns Officer, CIVICUS.”

Below, a woman describes her ordeal at Nyamapanda Border Post. Women are being raped by armed soldiers, she says. She speaks to our reporter Nhau Mangirazi

We close with this video of police and army officers beating up people at Gazaland in Harare’s Highfields suburb. We hope you enjoyed our coverage.