Source: JUST IN: Judge under pressure to resign | Herald (Africa) 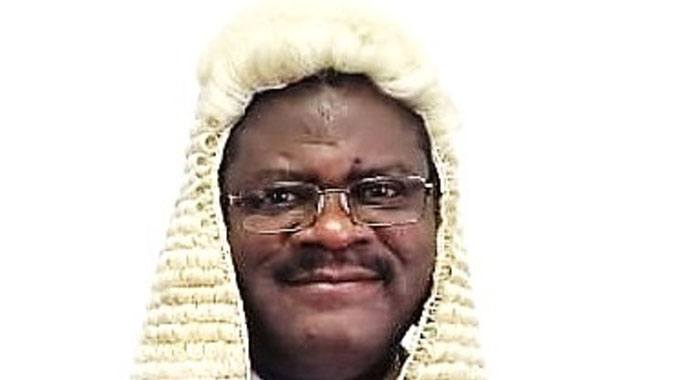 Fidelis Munyoro Chief Court Reporter
Some lawyers have urged High Court judge Justice Thompson Mabhikwa to resign to preserve the dignity of the bench following allegations of an intimate affair with a member of support staff, although the Judicial Service Commission is still investigating whether a relationship with such a work colleague breaches the judicial code of ethics.

Investigations into the judge’s alleged intimate affair with a member of the support staff in Bulawayo, Ms Oratile Nare, are underway after nude pictures and raunchy WhatsApp messages, allegedly from the judge’s phone, recently circulated on social media. The judge is a widower.

Some lawyers who spoke to The Herald said the Judicial Service Commission was right to move in swiftly to “deal with a clear reputational risk” and to see if two sections of the judicial code of ethics that all judges must follow had been breached.

“The judge owes it to the profession and to the people, on whose behalf he exercises judicial authority to resign,” said a veteran Harare lawyer speaking on condition of anonymity, querying how the judge can face the lawyers and members of the public in court.

Another lawyer based in Bulawayo said the alleged actions of Justice Mabhikwa were in clear breach of section 7 of the Judicial Code of Ethics. He described the judge’s liaisons with a subordinate as manifestly improper.

“The fact that he has been taking and keeping such images which have now been circulated makes a bad situation worse,” he said on condition of anonymity.

“Judges are justifiably held to a higher standard than ordinary citizens. It does not help matters that this scandal has blown out with such fury only two months after the judge lost his wife. Could the judge not have waited? What example is he setting?”

Section 7 (1) of the judicial code of ethics demands that a judicial officer “shall avoid impropriety and the appearance of improper behaviour in all his or her activities, in and outside court, and shall avoid any conduct that may result in bringing the judiciary into disrepute”.

On Tuesday, the JSC issued a statement advising that investigations into the matter were underway and the public would be advised of the outcome in due course.

Allegations are that Justice Mabhikwa and Ms Nare, an assistant of fellow Bulawayo judge Justice Maxwell Takuva, have been in an intimate relationship and that Ms Nare, jealous over what she allegedly believes is another lover of the judge, reportedly forwarded what are described as the judge’s exchanges with the other woman to almost all his contacts, including a judges’ group.

Ms Nare had reportedly went through Justice Mabhikwa’s phone sometime during the night and discovered that the judge had sent pictures of his body to another woman only identified as Petty or Patie. The offensive package included the judge’s raunchy messages exchanged with Patie or Petty, who also sent the judge pictures of her body.

Meanwhile, a lady with almost the same name and similar surname as the one involved with Justice Mabhikwa, is furious after an online publication used her picture on the judge’s story.

“I Uratile Nare would like to strongly refute and categorically deny the allegations made by ZimLive Editor Mduduzi Mathuthu in an article published on the 24th of February 2021. The article carried my picture implying that I was the ‘irate lover’,” said Miss Nare.

“This is purely fake news. This misleading and completely distorted information was published on various social media pages and newspapers including ZiMetro and zwnews. Such frivolous reporting has a direct impact on my reputation being besmirched and is causing damage to my career which I have painstakingly built with years of hard work. Not to mention the trauma, gross pain and suffering I am experiencing as a result of this article.

“I want to take the opportunity to provide some important context to clear my name. Firstly, my name is Uratile Nare and not Oratile Nare who I am not related to. Secondly, I do not work for the Judicial Service Commission as I am a 3rd year student at one of the local universities and I am currently completing my attachment in Harare, Zimbabwe. Third and finally, I have never met or interacted with Justice Thompson Mabhikwa, neither do I know of him.”

She intends to pursue the full extent of legal remedies available to clear her name.