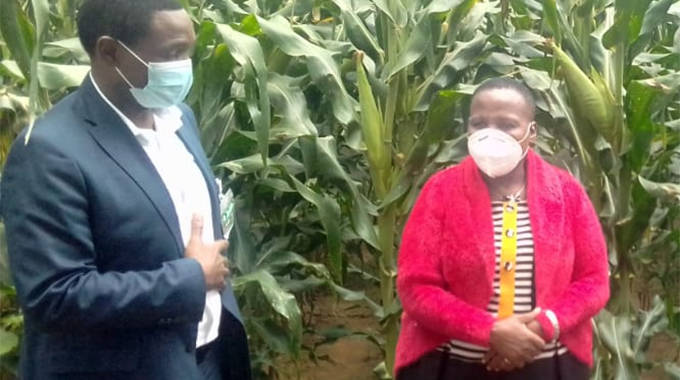 Andrew Muvishi Mash East Correspondent
Farmers in the Mashonaland East province are expecting a bumper harvest this season following good rains that have been received across the country as well as the well timed distribution of inputs.

Speaking during a tour of farmers under Command agriculture inputs scheme at Mhwendamwi in Marondera, Minister of State for Provincial Affairs and Devolution Aplonia Munzverengwi who was accompanied by CBZ Agro-yield Chief Executive Officer Mr Walter Chigodora hailed Mr Shingirai Tavengwa for embracing the command programme from which he was expecting a yield of 10 to 11 tonnes of maize per hectare.

“We want to thank our Government for introducing this programme. We received our inputs in time and we are expecting 10 to 11 tonnes per hectare.

“As we are speaking, preparations for harvesting are already underway,” he said.

Mr Tavengwa said there are expecting close to 1 000 tonnes of maize. Minister Munzverengwi urged all GMB depots across the province to prepare for a bumper harvest.