Source: just in ... Teachers to embark on 275km march for US dollar salaries | Daily News 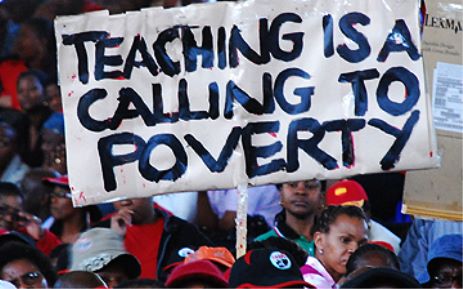 HARARE – Rural teachers are set to embark on a 250 km march from Mutare to Harare in a protest to demand salaries in United States Dollars and demanding higher bonus payment.

In a letter to Finance minister Mthuli Ncube, Amalgamated Teachers Union of Zimbabwe secretary general Robson Chere said they are going to walk for a staggering 10 days from December 9 to 19 from the eastern city to the capital Harare.

“In terms of section 59 of the Constitution, teachers are going to march demanding that their salaries be paid in US dollars and that their bonuses be paid in full. Teacher’s salaries are being paid in RTGS, contrary to the 2012 negotiated agreement that salaries would be paid in United States dollars.”

Chere said the teachers will camp at the ministry’s offices until their issues are addressed.

“The teachers will camp at the ministry of Finance and Economic Development offices until their grievances are met,” he said.