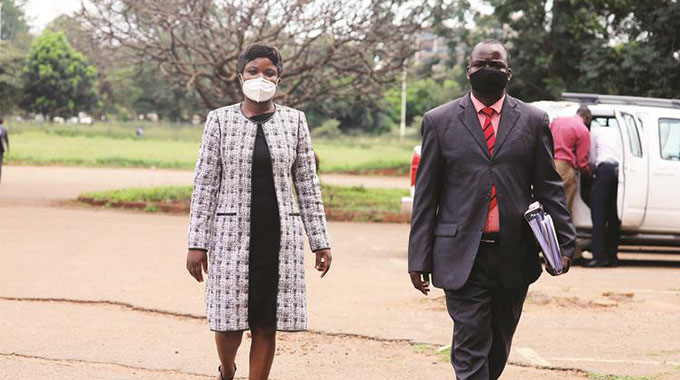 Former Minister of Labour and Social Welfare Petronella Kagonye (left) being escorted by a detective as she arrives at Harare Magistrate Courts yesterday. — Picture: Lee Maidza

Former Minister of Labour and Social Welfare Petronella Kagonye yesterday appeared in court on allegations of fraudulently parcelling out stands to desperate home-seekers.

Kagonye faced four counts of fraud, one of theft and another one for criminal abuse of office when she appeared before Harare Magistrate Mr Stanford Mambanje.

Prosecutor Mr Michael Reza did not oppose bail, saying the investigating officer had written that Kagonye was not a flight risk and was also breastfeeding a 7-month-old baby who should not suffer for the deeds of her mother.

He proposed that Kagonye be granted $30 000 bail and stay at her given address and should not interfere with witnesses.

He also said she should report once a week on Fridays at the police and to surrender her passport.

Kagonye’s lawyer Mr Rungano Mahuni told the court that his client was denying the charges. Mr Mambanje granted bail to Kagonye as submitted by the State.

The matter was remanded to March 30.

On the first count, the complainant is Vaduku Housing Cooperative.

The court heard that some time in February 2014, Kagonye approached the cooperative and informed its members that she owned a piece of land at Solomio Farm yet it belonged to ZB bank

It is the State case that she went on to tell the cooperative members that she had offered them the land for residential stands.

Kagonye then informed members to pay US$10 per square metre and the value of a stand would be determined by size.

It is alleged that during the same period Kagonye received US$20 000 from Porte Rodgers the chairperson of the cooperative.

The cooperative suffered total prejudice of US$38 500.

Kagonye used the same modus operandi and fleeced Shingiriro Housing cooperative US$48 500 and a further US$148 500 received from Solomon Mujuru Housing Cooperative after selling them another piece of land belonging to ZB bank.

Kagonye allegedly connived with Nyangui Housing Trust and also defrauded Ruwa residents US$40 000 after misrepresenting that she owned Cloverdale Farm in Goromonzi.

It was further alleged that between June 2018 to July 2020 Kagonye wrote to then Information Communication Technology Minister Supa Mandiwanzira requesting computers to donate to schools in Goromonzi South.

It is the State’s case that on June 20, 2018 Mandiwanzira then wrote to Potraz requesting facilitation of the donations through its e-learning project to Goromonzi South schools.

Potraz donated the computers to Kagonye which were collected by her brother Evans Kagonye on her behalf and he signed the collection form.

Potraz made a follow up on the donation, but up to date the computers cannot be accounted for.