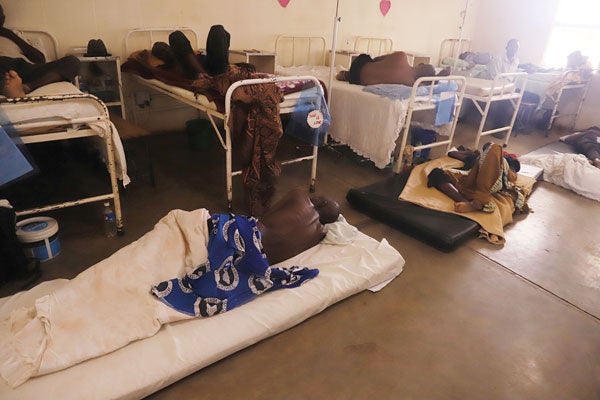 IT is barely 10 o’clock in the morning, but the sweltering heat is unforgiving and scores of patients from all over the country sit huddled on wooden benches while others are sprawled on the pavement around the entrance of the outpatients department at Karanda Mission Hospital, Mt Darwin.

A pregnant young nurse aide, dressed in pink, calmly attends to each patient, but clearly, she is overwhelmed because more patients keep walking through the gate a few metres away. It gets worse when a Kurai bus from Harare docks by the gate and more patients flock into the hospital to join the long, meandering queue.

The bus is literally emptied of passengers, who have all come in desperation to seek medical care, which has been elusive in public hospitals across the country following the doctors’ strike that began two months ago.

An elderly man with a dangling urine bag peeping from the hem of his worn out trousers walks with determination and shrugs off a helping hand from his aide, who has accompanied him from Harare. It looks bloody, but the man is unperturbed and his face lights up as he approaches the nurse aide.

A heavily pregnant woman waddles along carrying her oversized bag. She is alone. The bus fare (about $70) proved too much for relatives to accompany her.

Kurai is the only bus that has not yet hiked its fare for the 200km trip from Harare.

NewsDay Weekender had earlier trailed the speeding bus, whose driver was more concerned with honking his horn than paying attention to the sharp curves and the many dips on the road.

Back at the 150-bed mission hospital, the smell of sickness, blood, wounds and disease hangs thick, but no one seems to mind. They are only too happy that at last they are at a place of hope and pin their hopes on the dedicated staff to heal them and restore their health.

For such a crowd, there is a surprising quietness and serenity as each individual awaits their turn to be served. Many have come from faraway places like Gokwe, Rusape, Gwanda, Kwekwe and even Beitbridge.

Besides an occasional cough and hushed whispers, it remains peaceful.

For the past few weeks, this has been the situation at this lovely establishment, which is known for its quality service and dedicated staff. It is one of the last few oasis of hope in the madness that prevails in most public hospitals, which have literally ground to a halt in terms of operations.

Taison Hloko (60) from Muzarabani cuts a lone figure as he sits by a concrete bench. He is waiting for the visiting hour, so that he can see his wife, who is admitted at the hospital.

“My wife was involved in an accident with a scotch cart and fractured her pelvic bone in September. Ideally, we would have taken her to Harare, but the situation there was pathetic. There were no doctors,” he recalls the painful experience.

Desperate to save his wife’s life, Hloko braved the long draining trip to Karanda — an Evangelical Alliance Mission-run hospital which boasts of treating over 100 000 patients and performing about 3 500 surgeries annually.

“The journey was too painful for her, but we both had to be brave because we knew this place was her only chance,” he said.

Since then, Hloko has been hanging around the hospital, sleeping in the open at the verandas of nearby shops.

“We sleep on the verandas of the shops and during the day we just walk about waiting for the visiting hours. It has been very difficult for us, but there is no other place I would rather be,” he said with resignation.

Hloko is upbeat that soon, his wife will be discharged and they can go home, but he makes a plea to the doctors.

“Please come back to work. We need you. This is no way to live. People are struggling,” he said.

But the reality of the situation across the country’s hospitals is reflected in the wards at Karanda, which are literally swarming with patients.

In the male wards, all the beds are occupied as well as the floor.

The scene is shocking as well as sad. Grown men, mostly shirtless because of the suffocating heat, crouch on their beds surrounded by relatives, who have come to visit. Oblivious of their surroundings, they chat happily and are eager to hear news from home.

Despite being overcrowded, the patients are well taken care of. The ever-polite staff is always on hand, ready to assist, but the workload is evidently taking a toll on them.

After every few minutes, another stretcher bed is wheeled in with another patient from the surgery. There are many of these apparently. Some patients lie on these stretcher beds in the passage as they wait to be admitted.

“I had to sleep under my husband’s bed after his surgery, because he needed assistance. It was only a bit uncomfortable at first to be in a room full of men, but when I realised that we just wanted the same thing I relaxed,” Jane Magoso said.

But she feels he was discharged prematurely.

“I do not fault the service here; it is excellent, but because there are too many people coming every day, they are running out of space and so at times they discharge quickly. We sort of understand because others also need help,” she said.