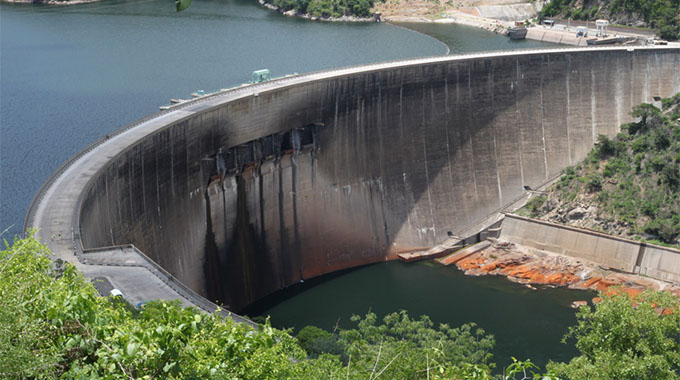 Golden Sibanda Senior Business Reporter
State power utility, Zesa, needs to strictly adhere to a tight prescribed water ration that allows it to generate an average of 358 megawatts at Kariba to avoid depleting Kariba Dam following revelations the reservoir is left with only 24 percent of water usable for power generation.

The situation at the world’s largest man-made dam is critical and Zesa needs to strike a power import deal with South Africa’s Eskom by September to avoid tipping over an already precarious power situation in the country.

This is because demand for power in Zimbabwe, at peak periods, stands at an average 1 800 megawatts, but the country’s internal capacity can only manage a maximum 800-900MW at best due to antiquated equipment and effects of drought, which have decimated generation at Kariba South.

“Kariba water level is 24 of live capacity. We are allowed to generate an average of 358MW to conserve water for next season,” Engineer Chivaura said last week.

Kariba Dam is designed to operate at a maximum holding level of 485 metres and minimum level of 475 metres, which is the minimum water level for purposes of power generation, known as live water.

Below 475 metres the water in the Kariba Dam may only be used for recreation and fishing. Continuing to drain the dam by generating power poses the risk of depleting the reservoir and jeopardising chances of getting power from it next season as it would take long to fill up.

The water level in the Kariba Dam has dropped drastically this season owing to El Nino-induced drought experienced in the Zambezi River’s catchment area, which feeds Lake Kariba. The catchment area stretches 2 700 kilometres to northern Zambia.

Kariba Dam, shared with neighbour Zambia, who generate power on the northern bank, may not be able to build sufficient stocks to support significant power output until March or April next year, when Zambezi’s flow starts peaking strongly. This is because the Zambezi River starts from a higher ground in the north of the flood plains and reaches a plateau flatland that makes the Barotse floodplains, which suck huge amounts of water first and eventually release into the Zambezi River when saturated at the peak of the rainy season around February.

A strong flow of the mighty Zambezi River is noticed in Victoria Falls around March or April of each year, meaning that Kariba Dam receives its optimum inflows around May, with the dam’s water levels reaching optimum levels around June.

As such, Lake Kariba’s fast receding water levels present the real risk that Zimbabwe may not be able to use Kariba South Power Station to carry significant load of its demand for electricity after December this year.

The need to import

Given this state of affairs and power generation constraints at Hwange Power Station, which are occasioned by the base-load power plant’s, only imports at this point in time can give Zimbabwe relief from the rolling black-outs.

Zimbabwe has already started processes to import power from the Day Ahead Market administered by the Southern African Power Pool (SAAP) and is currently getting 50MW from Mozambique’s Hydro Cahora Bassa.

“We have negotiated with Eskom to access imports and we are completing commercial formalities in order to access the imports,” Mr Chivaura said, adding: “When unit 6 at Hwange is brought back to service it will add 160MW to the grid.”

What remains to be seen is whether Zesa can thrash out a good power supply agreement with Eskom, which has previously threatened to cut power supplies after Zimbabwe failed to settle its huge outstanding bill in time.

Energy and Power Development Minister Fortune Chasi revealed recently that the power utility had paid US$10 million out of the US$33 million Zesa owed Eskom.

But he warned that partial payment of the debt did not mean rolling power cuts, stretching for 18 hours in most areas around major cities, will immediately go away, as Zesa still needed to engage Eskom first while the country also faces shortage of forex needed for imports.

Former Zesa chief executive officer Engineer Ben Rafemoyo said recently that the quickest way for Zimbabwe to get supplies from the region was to import from the region, but multi-million dollar debts posed hurdles.

Cumulatively, the Zimbabwean State electricity producer owes US$83 million to regional utilities, including Mozambique’s Hydro Cahora Bassa, where Zesa is also getting some power to manage a more than crippling deficit.

“To solve the current problem, the quickest way is to resolve the debt issue with those who can supply power to us so that they can continue to supply because that does not require putting up a (new) plant, which will take some time,” said Eng Rafemoyo.

Notably, the power deficit bedevilling Zimbabwe has not come as a surprise because it was forecast to happen as far back as 2005. Minister Chasi also indicated that to improve its capacity to maximise output from local assets as well as boost financial resources for imports, Zesa needed to recover more than $1,2 billion it is owed by customers.

The power deficit is also because Hwange’s reliability and uptime is seriously constrained by lack of sufficient maintenance due to lack of foreign currency required to import spares.

In fact, some of the thermal power plant’s generators have on several occasions failed to undergo periodic major and statutory maintenance programmes.

Zimbabwe is facing a power crisis of a serious magnitude because the country has invested very little, apart from the US$533 million that went into Kariba South, towards extending internal power production facilities; the second last major ones being Hwange stages 5 and 6 in 1986.

However, it is not all doom and gloom. There is light on the horizon for the power situation to normalise after Government in April commissioned Hwange stages 7 and 8, which are expected to take at least 42 months to complete and will add 600MW on to the national grid.

Further, Zimbabwe and Zambia are jointly working to develop a massive hydro power, Batoka Gorge, which will also take almost similar length of time to for its construction to be completed and will bring 2 800MW to be shared between the two neighbouring southern Africa countries.

US electrical systems giant, General Electric (GE) and Power Construction Corporation of China (China Power) were recently selected by Zimbabwe and Zambia to undertake construction of the power plant. The Government of Zimbabwe has also issued more than 40 independent power producer’s licences, including a 2 700MW initiative in Gokwe North by Zimbabwe Stock Exchange-listed RioZim, which are at various stages of development.