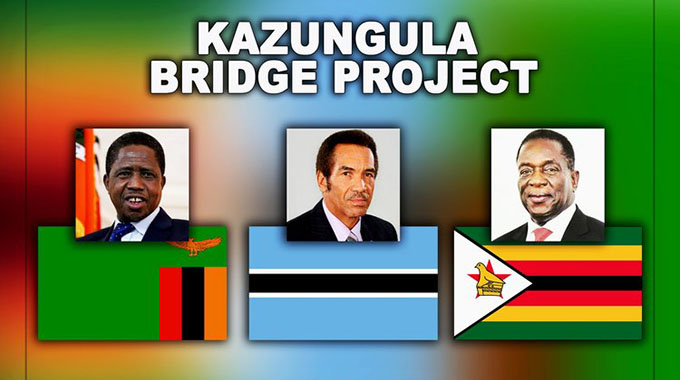 Kazungula Bridge – gateway to Sadc’s North-South Corridor President
Mnangagwa is today set to join his regional colleagues – Seretse Khama Ian
Khama of Botswana (centre) and Edgar Lungu of Zambia (left) – to inspect
progress on the multi-million-dollar Kazungula Bridge in Kasane, which
upon completion will enhance intra-trade in the Sadc region and beyond

Lovemore Ranga Mataire Senior Writer
President Mnangagwa is today set to join his regional colleagues – Ian
Khama Seretse Khama of Botswana and Edgar Lungu of Zambia – to inspect
progress on the multi-million-dollar Kazungula Bridge in Kasane, which
upon completion will enhance intra-regional trade within the SADC region
and beyond.

While some observers have questioned President Mnangagwa’s involvement in
the bilateral project between Botswana and Zambia, the truth is that the
Kazungula Bridge represents the triumph of regional integration and
cooperation as the infrastructure has ripple benefits to SADC.

This will be President Mnangagwa’s second visit to Botswana since his
inauguration last November. The President visited Botswana last month
after being invited by President Khama during which various economic
cooperation deals were signed between the two countries.

Besides the obvious economic benefits to be accrued through easy passage
of freight and passengers, President Mnangagwa’s presence at Kasane is
part of his administration’s broader vision of embracing intra-regional
trade and maintaining cordial relations with neigbouring countries.

ED’s attendance at the monitoring ceremony will be the ultimate symbolical
gesture of goodwill by his administration and confirmation that he is
ready to take Zimbabwe on a different trajectory.

Not so long ago, the governments of Zambia and Botswana concluded a joint
US$300 million venture to build a 920-metre rail and road bridge at
Kasane. The site where the bridge is being constructed is a unique
historical and geographical phenomenon.

It is as if the Creator deliberately crafted a confluence where the Chobe
River that divides Namibia and Botswana meets the mighty Zambezi with
Zambia being across, while Zimbabwe which takes a large chunk of the
Zambezi, parallels Botswana.

When viewed from space, the site where the four countries supposedly meet
is a marvel and has over the years been a source of contention as the four
countries could not conclusively agree on the exact demarcation of
borders.

According to NASA’s earth observatory data, the precise number of
international “tripoints” is difficult to determine because of inherent
political disputes. A United Nations registry lists 176 places where the
borders of three countries meet. China is listed as having the highest
number of tripoints for one country, with Austria -a relatively small
country – having nine tripoints.

Space Administration as the place where the world’s most notable tripoints
fall in the middle of the Zambezi River, near the borders of Botswana,
Namibia, Zambia and Zimbabwe.

However, the Kazungula confluence is listed by NASA as the place where the
world’s most notable tripoints fall in the middle of the Zambezi River,
near the borders of Botswana, Namibia, Zambia, and Zimbabwe. The tripoints
are shown on a satellite image of the Zambezi River, which was captured by
the Operational Land Imager. Zambia, Zimbabwe and Botswana come together
at the easterly point.

Interestingly, there have been a few international incidents revolving
round this particular quadripoint or near-quadripoint. In 1970, South
Africa (which at the time occupied Namibia), informed Botswana that there
was no common border between Botswana and Zambia, claiming that a
quadripoint existed.

South Africa at the time claimed the Kazungula Ferry, which links Botswana
and Zambia at the quadripoint, was illegal. Botswana firmly rejected both
claims and confrontation ensued during which shots were fired at the
ferry. Years later, the Rhodesian army attacked and sank the ferry,
maintaining that it was serving military purposes. The matter had to be
settled by one Ian Brownlie, who put the matter to rest in 1979 by stating
the possibility of a quadripoint could not be definitely ruled out.

Brownlie, who died in a car accident in Cairo on January 3, 2010, was
described by the UK’s The Telegraph newspaper as “one of Britain’s leading
international lawyers”, with a long career as practising, authoritative
scholar and “progressive activist”.

It has since been agreed that the international boundaries contain two
tripoints joined by a line roughly 150 metres long forming a boundary
between Zambia and Botswana. The ever-shifting river channels and the lack
of any known agreements addressing the issue before 2000 led to some
uncertainty in the past to the legality of a quadripoint existence.

Given the fact that the construction of the bridge has been on the cards
since 1999, it is only logical that the three countries that initially
consummated the idea be present to appreciate the progress thus far made
in making the easy passage to Zambia and beyond a reality after years of
political haggling.

As it stands, Botswana has only about 150 metres of river frontage on the
Zambezi, being sandwiched on the south bank between the extreme tip of
Namibia’s Caprivi Strip and Zimbabwe.

Besides not being part to the funding and construction of the bridge,
Zimbabwe geographically benefits from the hive of economic activity likely
to be spurred by easy passage given its proxim- ity.

The project is expected to reduce the time taken to cross the border from
30 hours to six hours on average and lower the cost of crossing the border
and trade between Botswana and Zambia is naturally going to increase.

According to the Botswana government, the envisaged benefits of the bridge
include reduced transit time for freight and passengers, reduced
time-based trade and transport costs, improved border management
operations arising from the new one-stop border facilities and increased
traffic throughput along the North-South Corridor.

It is also critical to note that upon its completion the bridge will be an
enabling infrastructure for the North-South Corridor and will serve the
economies of eight SADC countries and a key trade route linking the port
of Durban in South Africa to the inland countries of Botswana, Zambia,
Malawi, the DRC up to Tanzania.

The economies of SADC of which Botswana and Zambia are major players who
contribute nearly 40 percent of the GDP of sub-Saharan African, equivalent
to US$340 billion, according to 2007 figures.

So in making his presence at the monitoring event, President Mnangagwa is
not only sending positive regional signals but is also acknowledging the
adage of being your neighbour’s keeper. He is also extending his
magnanimity beyond our borders. The economic growth of Botswana or Zambia
or any other country has serious contagion effect on the whole region.

It is also crucial to note that the construction of the bridge
insignificantly affects trucks passing through Beitbridge as some
transporters will still find the Beitbridge-Chirundu route viable
particularly when travelling to Malawi or Lusaka. Zimbabwe needs to
complement the Kazungula route by speedily working on the dualisation of
the Beitbridge-Chirundu highway.

Crossing the Zambezi River by a pontoon at Kazungula, according to people
who live around the area, has always been a nightmare. Many accidents have
occurred with hundreds of people including former Zambian southern
province minister Maimbolwa Sakubita, have lost their lives when the
pontoon capsized in the 1970s.

Another 15 more people, mostly Zambians that included women and children,
perished when a South African heavy-duty truck overturned, throwing
passengers on board the pontoon into the crocodile-infested and
fast-flowing Zambezi River.

Given the fact that the bridge will connect Botswana, Zambia, Malawi, the
DRC, Mozambique, Tanzania, South Africa and Zimbabwe, it is without doubt
that it will boost regional economies through increased traffic throughput
on the North-South Corridor, increased global competitiveness of goods as
a function of reduced time-based trade and transport costs and a reduction
of transit time from three days to less than half a day.