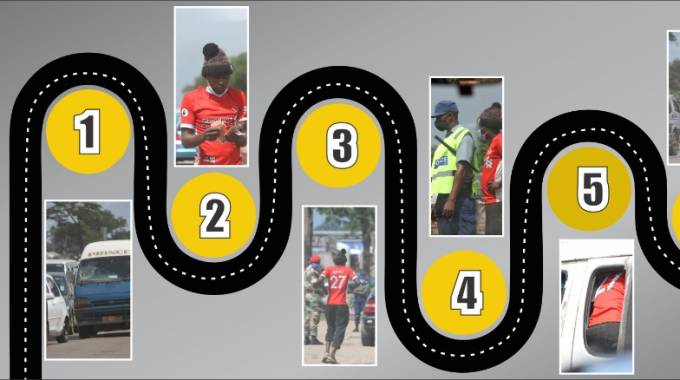 Emmanuel Kafe
A RAMSHACKLE commuter omnibus (kombi) speeds into an undesignated pick-up point adjacent to Mbudzi roundabout, where a group of commuters rush into the vehicle.
The desperate passengers wrestle their way into the rickety vehicle, which is filled at the blink of an eye.
A stone’s throw away from the unsightly commotion is a police checkpoint manned by armed law enforcement officers, who are ensuring movement restrictions are respected, along the busy Simon Mazorodze road.
The police appear oblivious of the turmoil taking place nearby, apparently indifferent to the flagrant disregard of the law.

Once the vehicle has loaded, the conductor alights before making his way towards the checkpoint, with wads of notes in his hands.

The conductor then hands over the cash to one police officer before rushing back to the kombi, which has been slowly making its way towards the roadblock.

Moments later, the vehicle is cleared to pass without going through the necessary Covid-19 protocols that include checking for exemption letters from passengers and the kombi crew. Surprisingly, a police officer in uniform is seated in the front seat.

The Sunday Mail crew investigating the menace of kombis that are flouting lockdown restrictions in Harare, pursues the kombi — registration number ADZ 6602 — as it flies past the police checkpoint, heading towards central Harare.
However, it does not have number plates at the vehicle’s rear.

From there on, the kombi carelessly manoeuvres past other motorists that are perceived to be delaying it.
Within minutes, the kombi reaches its destination — Charter Road in central Harare — before passengers scurry out at the command of the conductor, who is on the lookout for police details on patrol.
Private passenger vehicles which are not registered under the Zupco franchise have been banned as part of measures to curb the spread of the coronavirus.

“We do not condone any corrupt activities by members of the police services; it is a dismissible offence. We will conduct investigations into the matter,” says Asst Comm Nyathi.

“As you are aware, we have been arresting some rogue police officers who are found to be operating outside of the confines of the law,” he said.

As of yesterday, 3 127 people had been arrested for contravening Covid-19 regulations since the level four lockdown began on January 5.

“Nine hundred and four people were arrested for not wearing masks, which is a cause for concern considering the spiking numbers of positive cases being recorded in the country, while 1 710 people were also arrested for unnecessary movements.”