Lawlessness will be crushed: ED 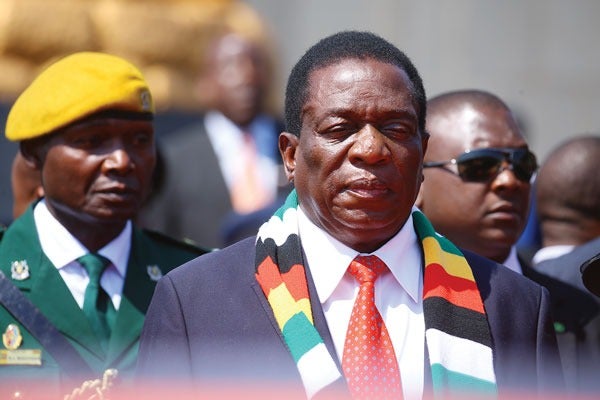 President Emmerson Mnangagwa yesterday threatened to crush any acts of lawlessness without fear or favour.

Speaking at the burial of the late Major-General Trust Mugoba at the National Heroes Acre, Mnangagwa said under his government, the rule of law shall be applied without exception.

“My government will not allow the abuse of the constitutionally enshrined democratic rights and freedoms; that comrades like the late Major-General Mugoba, fought so hard to achieve,” he said.

“Acts of subversion, lawlessness, civil delinquency disguised in whatever manner; will not be condoned. The law will apply, without fear or favour.”

Mnangagwa said he was aware of the economic hardships that the country was going through.

“I am aware of the current economic hardships being experienced as a result of a combination of factors such as the continued illegal sanctions, the ongoing economic reforms and drought among other issues. My government will be rolling out more social safety nets, to cushion the vulnerable members of our society,” he said.

On corruption, he said the fight against graft will continue at all levels, adding that every individual must be accountable for their actions.

Turning to the late Mugoba’s heroic deeds, Mnangagwa described him as a hero who understood the importance of hard work and the centrality of economic empowerment to sustainable economic development.

He said the country was disheartened by his untimely death, especially at a time news of the death of former President Robert Mugabe had also been received.

“A sombre mood engulfed the nation on Friday September 6, 2019, as we received the sad news of his untimely death, hours after receiving equally disturbing news of the passing on of our founding father and revolutionary icon, the late former President, Mugabe. It is a heavy double blow that has been dealt to our nation,” Mnangagwa said.

Mugoba family representative Grace Mabika described the late army boss as a loving person who was a problem solver and unifier, adding that he threw away opportunities of a scholarship in the United Kingdom in order to take care of his parents and educate his siblings.

Mugoba, who was born in 1959, was a chief of staff in the Zimbabwe National Army and was currently on secondment to the African Union headquarters in Addis Ababa Ethiopia, as the chief of staff for the AU stand-by force.

The post Lawlessness will be crushed: ED appeared first on NewsDay Zimbabwe.