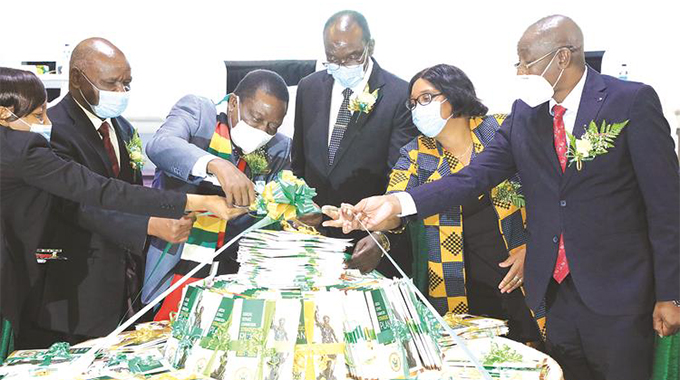 The Judicial Service Commission (JSC) should play a leading role in the fight against corruption and speed up the conclusion of corruption cases before the courts as Government pursues a development agenda anchored on strong, responsive and transparent institutions.

This was said by President Mnangagwa in Harare yesterday when he launched the JSC strategic plan that will run from 2021-2025.

The President commended the JSC for creating specialised anti-corruption courts in line with Government’s directives, saying Government would avail resources to ensure the JSC decentralised its functions as outlined in the Plan.

The JSC was a critical State institution in the ongoing reform agenda, with regards to entrenching constitutionalism and the rule of law as building blocks in the development agenda.

“There is no going back on the development course we have charted. The rule of law will not be suffocated by incidences of corruption for narrow expediencies. My Government expects the judiciary, as the custodians of the administration of justice, the rule of law and constitutionalism, to take a prominent and leading role in that fight against corruption,” said President Mnangagwa.

He lauded the JSC for coming up with the strategic plan saying it was in sync with the Second Republic’s culture of promoting the establishment of results-oriented and responsive mechanisms towards improved administration and delivery of justice.

The strategic plan, which is the third five-year plan, was crafted after consultations with stakeholders in the legal sector, civil society and members of the JSC with the support of the United Nations Development Programme.

“The Second Republic is determined to enhance national cohesion, economic growth and prosperity to also build an environment where our people, at all levels, can realise their full potential,” he said.

The Government was crafting progressive policies anchored on Vision 2030 to grow the economy and improve people’s livelihoods.

“To this end, the judiciary is vital towards the attainment of both our national Vision 2030 as well as Aspiration Number 3 of the AU Agenda 2063 which calls for ‘an Africa of good governance, respect of human rights, justice and rule of law’.

“The JSC strategic plan must therefore be viewed and interpreted as a sectoral plan of action that accelerates the attainment of national and continental aspirations,” President Mnangagwa said.

He reiterated that Government would not shy away from implementing innovative and responsive strategies to foster democracy, constitutionalism and the rule of law.

“The judiciary and our justice delivery system in general, are an important cog for the fulfilment of this exhortation. I am thus, pleased that the JSC has risen to the challenge and that the strategic plan we are launching today aptly and prominently captured the spirit and letter enunciated in various policy pronouncements and the NDS1.

“It is even more opportune that the JSC strategic plan has the same lifespan as the NDS1, meaning that our country stands to benefit immensely from law and the justice system as a vehicle to propel our national development.”

The President added that the judiciary should, together with other arms of the State, continue to promote peaceful and inclusive communities for sustainable development and the establishment of effective and accountable institutions accessible to everyone across the country.

He said for this to be achieved, officials in both Government and the private sector should be held accountable for their actions, adding that values of a corruption-free society should be inculcated in both individuals and organisations.

In his remarks, Chief Justice Luke Malaba said the attainment of development goals was premised on strict observance of the rule of law and effective protection of rights which required an efficient judiciary.

“The commission seeks to develop an independent, financially autonomous and sustainable, modern and efficient judiciary that is enthusiastically accountable to the public in its pursuit of a society in which the rule of law prevails,” he said.

He said some of their priorities included enhancing judicial independence, modernising and strengthening the efficiency of the judicial service, enhancing access to justice for all and strengthening accountability mechanisms to enhance public trust and confidence in the rule of law.

The strategic plan would also prioritise human capital development through continual training of all JSC members.

UNDP resident co-ordinator Ms Maria do Valle Ribeiro praised the JSC for coming up with the strategic plan saying observance of the rule of law was a prerequisite for development.

She also commended the JSC for promoting gender equality in the implementation of the plan and pledged the UNDP’s continued support to the JSC.