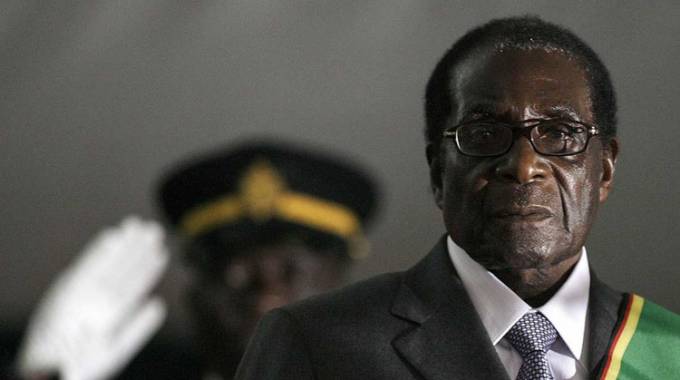 I rushed in first, as if I was one of the invitees or had some important role to play.

Of course, my duty was to do the usual – I was to be the biblical spider on the wall in the King’s Castle. He stood behind his office desk with Father Fidelis Mukonori, the Catholic priest, by his side.

The situation was a bit tense.

My duty on this day was to capture that shot at that moment when the Generals would salute their Commander-in-Chief.

That salute was important. It would tell a story, a story that the Generals remained loyal to their boss till the end. Indeed, in a single file, they came and one after another they gave their salute.

I had to capture it all.

Former President Mugabe then invited everyone to sit down and the meeting started.

The South African Defence Minister had come and was to receive a brief from President Mugabe on the state of affairs, wherein, she would proceed to a Sadc meeting in Angola.

This was the penultimate day I would last see the man after 22 years of serving him.

The last would be after the “Asante Sana” speech. I never knew President Mugabe personally prior to working for him.

I was simply head-hunted for the role. After serving him for 22 years, covering his official assignments and some domestic ones, I began to appreciate the kind of a person he was.

Some of his attributes were difficult to capture through the camera. If I am to talk about his demeanour as a gentleman, I would say he had excellent deportment, very few can match that.

He was always well-dressed. A casual look for him would generally mean a navy blue blazer and a grey trousers on a weekend coming for a party. A matching tie was a given. I never saw him in jeans.

That could be the reason why most people were surprised to see him in an Adidas track suit the other day.

I said to myself, “Hakuna mumwe, ndiChatunga chete who did that. (It could only have been Chatunga)”

At one time, the former President surprised many at the Rainbow Towers hotel, when he took out a small comb to touch-up his hair after poising for a group photo with other leaders. I was amazed at how he could discipline his body.

If he sat for a meeting, he would punish his body and sit there doing his work with very little recess.

But, despite that immaculate look, the former President was a poor subject for photos.

He wanted everything to be done like a drill and the photos tended to be stiff and a bit old school, where one would wait for the flash bulb to go off. For him, it seemed that photographs were mostly for the record, not a beauty contest.

However, what I liked most about him was that if you had successfully explained what you wanted to be done, he would follow the instructions.

His favourite question was ‘why?’

When you were done, he would clap his hands and say ‘good show’ as he walked away.

The moments I found him comical was when various ministers and officials were being sworn-in. He would look at how these new ministers wrote their signatures, I guess compared to his. His was a well-crafted cursive, which danced into a waltz to the end.

For the outrageous ones, he would look at them and say ‘he he heee, chirega uwone’.

President Mugabe was truly a man of letters.

He was so well and widely read such that one could hardly talk above his head on most conversations. One day, he was officiating at a Presidential Pass-out Parade of the ZRP at Morris Depot.

As was custom, after lunch, he would come close to the Police Band to listen to their tunes. Invariably, they would play ‘kure kwatinoibva makwiro’.

The late pianist, Promise John, would be leading on the piano. President Mugabe stood by the piano listening.

He asked the player if he knew the word that describes discord in music of the highest order.

The player did not know.

Nobody knew the word and he gave it and walked away.

I cannot remember the word, but I had never come across that word. He said he was a musician in his early years at school and would play the bugle — an instrument with only two notes.

In his last days at work, President Mugabe had become slow and frail, which was no surprise given his advanced age.

He was now delivering most of his speeches with his eyes closed. It posed a great challenge to photographers since they had to wait a long while to click their cameras when he opened his eyes a few times.Somebody described photographers as visual anthropologists.

I will expropriate that description and say that my mission differed from that of some of my colleagues.

There came a time when other photographers would be around President Mugabe just to capture the embarrassing postures he would find himself in, such as when he was dozing off in a conference or as he gapped to take a bite off his birthday cake.

That would be their prized photo.

The day he tumbled and fell at the airport, some celebrated a golden picture.

I am reminded of the story in the Bible, where sons saw their father sleeping naked.

I never celebrated such a picture.

It was vile to me.

Some years ago, we were in Sendai, Japan.

It was during a TICAD summit.

As the President was walking from one plenary hall to another, I was walking some distance behind him.

An African man, whom I did not know and who had stood aside to give him way, grabbed me by my arm to stop me and said, “My brother, you see that old man there, that is Africa’s grand man, he must be respected.”

After saying that, he walked away.

I was left wondering how a stranger could say that. From his accent, he could have been from West Africa.

RGM had become such a figure that when he found himself in the presence of super power leaders, him coming from a small country such as Zimbabwe, he seemed to match them in his own way.

At one time, we went to Russia, they were celebrating 70 years after the victory in the Second World War.

The former President sat to meet Vladimir Putin of Russia in his office.

I was in that office for about five minutes. Just like Putin himself, who sat there attentively and motionless, I received a history lesson.

The former President said to Vladimir Putin, “Here you are celebrating victory in a world war. Three countries had sought to divide the world for domination among themselves, Europe for Hitler, Asia for Japan and Africa for Italy.

“After defeating these imperialists, look what they are doing to you, a country that fought alongside them.

“They have imposed sanctions on Russia. We of Africa, fought to get our independence from them, to establish democracy, but they turn around and impose sanctions for taking back our land and accusing us that we lack democracy.”

All this makes me say that Robert Mugabe was a blessing to Zimbabwe.

Zimbabwe, we have this one in the bag, a reference point, do not adopt the language of those he fought all his life, who know the potency of such a legacy.

Some of our countrymen are failing to talk about Robert Mugabe without putting a ‘but’, ‘conflicted’, ‘checkered’ and so on in their narration of the old man’s history.

It’s as if, should they not include these words, funding to them might dry up.

They queue at SABC studios to give their analysis and sound learned. Yet one can see that all they want is to demonise the legend.

My view is that our image as Africans was immensely boosted by Robert Mugabe. For the sake of our history, he has to be celebrated without reservations.

He navigated the ship when the waters were most treacherous, yet he achieved what no other African leader achieved – that is giving land back to its rightful owners.

Others pride themselves of having been Mugabe’s adversary for close to two decades, turning the political adversity into a career.All this long, they would be throwing spanners into his developmental efforts. Getting him sanctioned even. Now they say he was a failure.

Fortunately, legends do not die.

They speak from the world yonder!

Joseph Nyadzayo is the Presidential Photographer