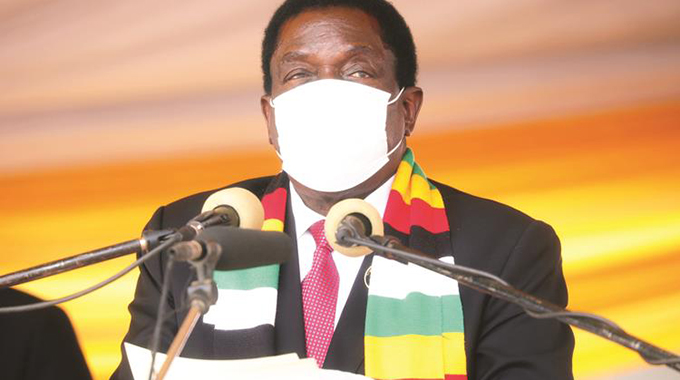 We gather here today at our sacred National Shrine in deep sorrow and grief as we lay to rest our comrade and National Hero, Brigadier-General Ruphus Chigudu who passed on, on 24 September 2020 at the age of 64.

Allow me on behalf of the party,  Zanu PF, Government and people of Zimbabwe, my family and indeed on my own behalf to convey our deepest condolences to the Chigudu family, foremost to his wife Vimbai Chigudu and children.

May you find comfort and solace in that the nation is with you over this huge loss. Together we have lost an astute military man, a father and a unifier.

We thus have lost a stalwart of the National Struggle, indeed a fearless cadre. May his soul rest in eternal peace.

The untimely death of Brigadier-General Cde Ruphas Chigudu came to me as a shock and to those he served with in Government, all of us in the party and especially those of us who participated in the liberation struggle.

It is sad that just on the 11th of June this year, Cde Ruphus Chigudu was promoted to the rank of a Brigadier-General. We in Zanu PF and Government have lost a great fighter who served his nation with honour, loyalty and distinction.

The defence and security establishment and the nation are poorer without him. Quiet and unassuming, he was a fearless veteran, fellow fighter who after Independence, transformed himself into a loyal and professional soldier, dedicated to the defence of our Independence and sovereignty to the very end.

Born on 11 December 1955, the late National Hero grew up in Chigudu Village in Chiendambuya communal area under Chief Makoni in Manicaland Province.

A bright student who excelled in his primary and secondary studies, jumping past all the systemic bottlenecks placed in his way by the settlers. The man we are interring here at the sacred shrine started his political activism in 1972 following a demonstration against the oppressive Rhodesian government.

He was arrested and detained in Marondera following a reaction to the death of a senior nationalist party official at the hands of the white settler regime.

The imprisonment did not deter him from perusing the revolutionary spirit that had gathered momentum. He joined the struggle in 1976 following the blatant racist policies at the then Rodox Private Limited company where he worked for in Bulawayo.

The oppressive system of companies in the colonial era led the late Brigadier-General Ruphus Chigudu to team up with his contemporaries and joined the liberation struggle.

What distinguished the late Brigadier-General Cde Chigudu from many of his generation was his strong urge to fight, resist and oppose the discriminatory national condition, even if it meant taking up arms and possibly paying the ultimate price.

The Independence and freedoms we enjoy today came from such collective vision and sacrifices by this brave generation which Cde Chigudu personifies.

He left the country for the struggle through Nyanga District of Manicaland. While in Mozambique at Doroi camp, the Rhodesian forces orchestrated a biological warfare which claimed several fellow comrades through what we called Matekenya, but the late Brigadier-General Cde Chigudu survived the attack.

Such were vicious, ruthless and planned attacks to our heroes and heroines. Lest we forget.

Once in Mozambique and after learning the art of guerrilla warfare, the late Brigadier-General, Cde Chigudu embarked on several duties of struggle, including teaching fellow cadres, and of course, going to the war front to engage colonial forces.

I applaud his teaching and leadership qualities, which also contributed to the execution of the protracted struggle for our independence.

His acts of gallantry, bravery, loyalty and hard work saw him rising to the rank of platoon commander. In 1977, he was withdrawn from the front and tasked to lead a contingent of 150 men to Cincu Training Camp in Romania to train in field artillery.

He stayed at the camp up to 1979 as an instructor. Our late national hero was later transferred to Sibiu Artillery School where he completed another Field Artillery Course in February 1981.

Exposed not only to the dangers of the war, but to the far reaching effects of the biological warfare, he never gave in to the whims and caprices of our enemies. Given the onslaught, machinations and clandestine shenanigans by our detractors, isu tasara ngatirambei takabatana, takatsunga in defence of our hard worn independence.

Violence, destruction of property and making Zimbabwe ungovernable can never be democratic and it is not what we fought for. He was attested in the Zimbabwe National Army on 1st of April 1981 with several responsibilities including army inspections, research and development.

His contribution to Zimbabwe and SADC’s peace and security is commendable. He earned himself several medals including the Independence Medal, Service Medal, long and Exemplary Service Medal as well as the Commander of Zimbabwe Order of Merit Award.

On the regional front he was awarded the Mozambique and Republic of Congo campaign medals. The late Brigadier-General Chigudu vanga vakazvipira hupenyu hwese kusunugura nyika. He defended our hard won independence, par excellence!

We lay him to rest in this month of October, which is significant to us as a nation and region, as SADC stands with us to fight the illegally imposed sanctions on us.

His burial must be a constant remainder of our collective resolve and the regional solidarity towards the unequivocal call for the unconditional removal of the sanctions by Britain and their allies.

The Land has come, and is now united with its people. It has come forever and is irreversible. There are those in our midst who are misreading what Government constitutionally seeks to achieve.

In pursuit of a narrow agenda, they think they have now found a credible platform for mobilising against Zanu PF and its Government. They are desperate, they are doomed.

My administration remains determined towards food security and self-sufficiency. We are heavily investing in mechanised agriculture with the support of our friendly countries and companies. Only last week, I launched the Belarus US$51 million agriculture mechanisation programme to accelerate the sustainable modernisation and mechanisation of our agriculture sector.

We must make maximum utilisation of the land which the late Brigadier-General Cde Chigudu liberated. He never hesitated to put his life for his country, principally for Independence, for land and general empowerment.

We have the weighty responsibility of producing and feeding the nation through heightening the preparations for the 2020/2021 agricultural season. Equally on the macro-economic front we are enjoying a balanced budget.

We are gradually reducing employment costs so more and more resources go towards national capital formation and gainful production. The national infrastructure in particular roads, dams and energy and power generation sector is being upgraded and repaired, with visible gains being recorded each day.

Cde Chigudu knew the value of peace. We pay tribute to him by cherishing peace, perfect peace in our Land. In this regard, I commend us the people of Zimbabwe for upholding peace, tranquillity, love and harmony which our late national hero fought for.

Meanwhile, I would like to urge us to continue observing the laid down Covid-19 lockdown measures. The novel coronavirus is still with us. We must not allow complacency to trigger a relapse. We value life above all else. Voting and democracy are enjoyed by the living not by the sick, dying or the dead.

Government is very concerned about growing cases of ritual murders of minors. Let me reiterate that all stakeholders in our criminal justice system speedily and strongly deal with the perpetrators so that this evil trend is expunged from our society.

Equally worrisome are the growing cases of armed and violent crimes.

We must draw lessons and inspirations from the late Brigadier-General Cde Chigudu whose profession was founded on use of firearms, who knew that guns are for the defence and protection of national interest unlike others in our midst who turn up against their own nation, betray their own people for the love of money, engage in criminal activities due to lack of principle. I have ordered our security arms to deal with such misdeeds.

Today we lay Cde Chigudu to rest. His contribution to who we are, remains written and remembered. He is the Hero of our people and our nation. We thus bury him here for remembrance and eternal reverence, alongside his peers.

As I conclude, let us not betray the sacrifices for self-determination and legacy bequeathed to us by the living and fallen Heroes.

God Bless you all!