Let’s not walk the 2019 route on tobacco

Source: Let’s not walk the 2019 route on tobacco | Herald (Opinion) 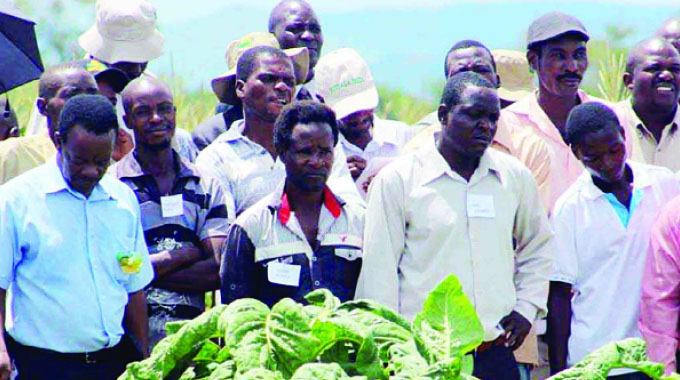 Obert Chifamba  Agri-Insight
THE opening of the 2019 tobacco marketing season coincided with new developments in the economy, which called for herculean efforts in information dissemination to enable growers to understand the new systems before going to the market.

Sadly, this did not happen, and what ensued was a scenario in which farmers temporarily withheld their crop, as they sought to understand how the new payment system would work.

When they finally decided to sell their crop, they were further frustrated by the idea that they were not going to handle hard currency, but vouchers from the Reserve Bank of Zimbabwe (RBZ) each time they wanted to make purchases.

Naturally, the farmer’s mind is like a copper kettle, if you give it a dent you will never efface the mark.

Many growers have since reduced hectarages or abandoned the crop for other seemingly better paying ones like maize, whose new producer price has been revised to $4 000 per tonne by Government.

This situation, coupled with unfavourable developments in the weather, have affected the national hectarage of the crop, which will also impact negatively on yields and the resultant revenue.

It will not require rocket science for anyone to see that there is need for all stakeholders in the tobacco industry to engage before the 2020 marketing season kicks off and do some self-introspection and see where they erred last season and come up with remedies.

All shortcomings of the 2019 marketing season should not be repeated this time around if tobacco is to remain one of the country’s leading foreign currency earners.

Key stakeholders like the Tobacco Industry and Marketing Board (TIMB) and contractors should take time to review how and where they can improve their services to farmers, while the recently formed Tobacco Marketing Board should also hit the ground running and bring new ideas into the fray.

It is obvious that those who constitute the board are conversant with the goings-on in the sector and know where things are either going wrong or correct, so they must come in as the new broom to clean the house.

RBZ, on the other hand, is naturally involved neck-deep in the new payment system and is aided by other stakeholders in the sector.

At this point in time, it should also be reviewing the system and see how it can be improved for the benefit of farmers who feel the system left them poorer last season, as it did not allow them to use their earnings at will.

The biggest problem farmers are facing at the moment is that most, if not all, service providers and input suppliers, are selling their products and services in US dollars, yet the farmers cannot access the currency.

Agri-Insight talked to farmers who felt they were being robbed of the chance to import their basic requirements at relatively lower prices, and are being forced to engage middle persons who later inflate prices at their expense.

The farmers feel that Nostro accounts should enable them to go and do business even outside the country and buy their own inputs or hire the services they want without consulting the RBZ, which in most cases is always inundated with requests for foreign currency from all sectors of the economy.

In recent years, Zimbabwe’s tobacco marketing season has been brought forward from starting at the end of April to early or mid-February.

TIMB says there was no particular reason for the shift except that they observed that farmers’ cash flows would be at their thinnest at that time, hence the need for some form of recapitalisation, and there was no better source than their own tobacco crop, as most of them would be ready for the marketing season by that time.

Of course, this observation applied to farmers producing tobacco under irrigation, as their counterparts depending on natural rains would only be ready starting late April at most.

If that trend is observed this year, then we are factually just a month and a few days away from the next tobacco marketing season.

For now, TIMB has not yet come up with the 2020 tobacco marketing season’s opening dates as the main dry land crop is still to attain 50 percent growth, that is, if it manages to survive the current scorching temperatures.

Interestingly, the transplanting of dry land tobacco is almost over, while harvesting and curing of the irrigated crop is under way.

The rainfall pattern has not been even throughout the country’s tobacco growing regions, but the crop is holding out well, according to TIMB chief executive officer, Dr Andrew Matibiri.

It is exciting to note that Dr Matibiri has confirmed that this time around, farmers should not expect significant changes in various monetary decisions instituted last season, as the final modalities of their payment processes are being ironed out in consultation with all key stakeholders and responsible authorities in the industry.

This process is crucial to farmers, as it left many of them disillusioned last season and contemplating to try other options besides tobacco.

While the farmers’ list of grievances keeps ballooning every season, they need to be reminded that they too have to play their complementary part to enable other stakeholders in the value-chain to play their roles effectively.

The farmers are required to comply with all administrative issues that include registering with TIMB, submitting their production or yield estimates, checking out if all stop-orders against their growers’ numbers are genuine, checking their contracting status and ensuring that their bank accounts, both RTGS and Nostro, are functional to avoid unnecessary rude shocks when the season starts.

Farmers intending to deliver their crop also need to do prior booking before proceeding to the floors so that they are advised on the most appropriate days to come to avoid unnecessary delays, and in most cases, congestion, at the floors.