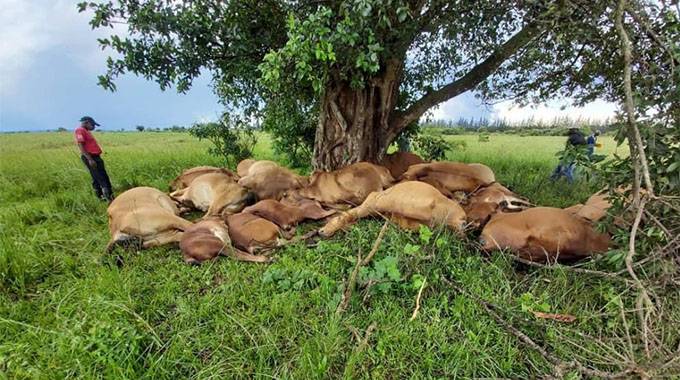 Chipinge commercial farmer Mr Dawie Joubert was left counting losses after his 25 cattle were struck by lightning on Thursday afternoon.

The district’s Department of Agricultural, Technical and Extension Services livestock promotion officer Mr John Mwandifura confirmed the incident and said he had liaised with the Chipinge district development coordinator Mr William Mashava over the case.

“Yes, I can confirm the 25 cattle owned by commercial farmer Mr Dawie Joubert were struck by lightning cattle at his farm, popularly known as Chibonere Farm, on Thursday,” he said. “The carcasses of the 25 cattle were ferried to a crocodile farm in Chiredzi.”

Incessant and heavy rains being experienced countrywide have seen increased incidents of lightning affecting both animals and humans.

Last month, five adults in Makonde district in Mashonaland West were hospitalised after being struck by lightning, while a trail of destruction on infrastructure has also been reported.

Constance Machemedze (20) was at Chinzanga Primary School sports ground when a thunderstorm reportedly began and she was struck while running for safety.

The Zimbabwe Electricity Supply Authority has also not been spared, attributing part of power outages in some areas to lightning striking critical equipment.