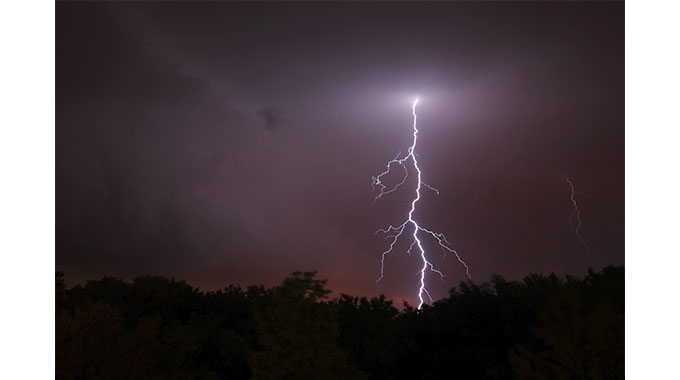 Michael Magoronga, Midlands Correspondent
A Gokwe woman died on the spot after she was struck by a bolt of lightning while on her way home from her fields.

Authorities in Gokwe South confirmed the incident but could not be drawn into immediately naming the deceased woman.

“The woman had just completed her work in the fields and she was now on her way home when disaster struck. She died on the spot after lightning struck amid heavy rains,” said Mr Musakanda.

Mr Musakanda said the woman left behind two minor children and an elderly grandmother she was taking care of adding that as CPU, they were forced to step in to ensure the family survives.

“We have to ensure that the elderly woman and the minor children are safe. The woman was the breadwinner so we are going to see to it that their welfare is taken care of,” he said.

The incident brings to three the number of people who have been killed by lightning related in the district since the start of the 2020/21 rainy season.

Meanwhile, Mr Musakanda said unlike the previous years, there were no flooding cases that have been reported thus far although a number of homes were destroyed leaving villagers stranded.

He said the CPU was in the process of engaging the business community and non-governmental organisations among other developmental partners as they seek to mobilise food and other items for the displaced families.

More than 100 families were left homeless after heavy rains and storm left a trail of destruction in Gokwe South last week.

“We have been approached by so many organisations and soon we are meeting to see how best they can chip in and support Government in an endeavour to feed and provide shelter for the affected families,” said Mr Musakanda.

As the rainy season progresses, there is a risk of heavy, destructive rainfall according to the Meteorological Services Department (MSD).

The torrents, according to the (MSD), would be accompanied by thunderstorms.

The authority also warned that flash flooding is likely to occur in some parts of the country.