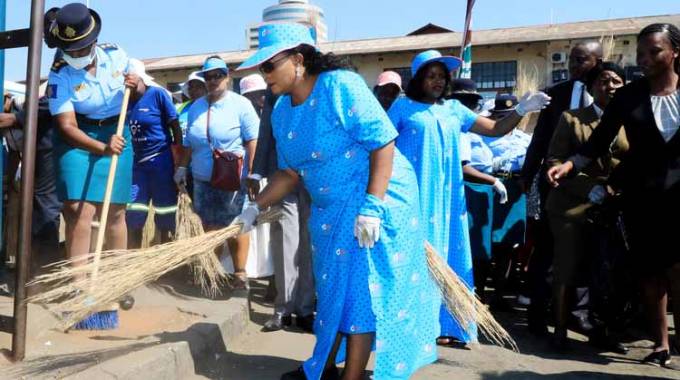 Local authorities should invest inadequate infrastructure in public places to ensure a clean environment that is compatible with a modern city, First Lady Auxillia Mnangagwa has said.

Speaking at a clean-up campaign in Harare’s central business district (CBD) yesterday, the First Lady said cities should ensure that areas such as vegetable markets and bus termini are supplied with water at all times.  City fathers could form synergies with various institutions such as churches in order to drive the agenda of a clean city, she said.

“There is need for local authorities to provide adequate infrastructure at all public places so that we maintain a clean environment as well as having a modern city,” the First Lady said.

“Refuse bins, sheds and water should be availed at public places such bus stations as they contribute to a clean environment.

“I will not tire until we have a clean city, clean environments, thus I would also like to commend various stakeholders that are here today for supporting the initiative. Let us all join hands together and clean our environment.” 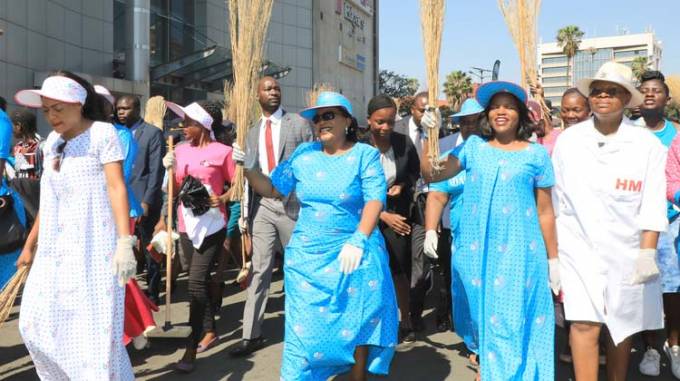 First Lady Auxillia Mnangagwa(centre), who is also the environmental patron participates at a clean-up campaign organised by leader of prayer group Daughters of Virtue, Prophetess Memory Matimbire(in white) in the Central Business District of Harare yesterday.-(Pictures by Tawanda Mudimu)

Daughters of Virtue president Mrs Memory Matimbe said the clean-up campaign was a way of preaching as well as supporting various initiatives in the country.

“Together we have made a positive impact on the environment. However, for us to sustain our efforts, every one of us, young and old, must play a significant part in this national call,” she said.

“It is also a way of preaching and praying for us inter-denominational churches.”

Most bus termini in the capital show signs of neglect.