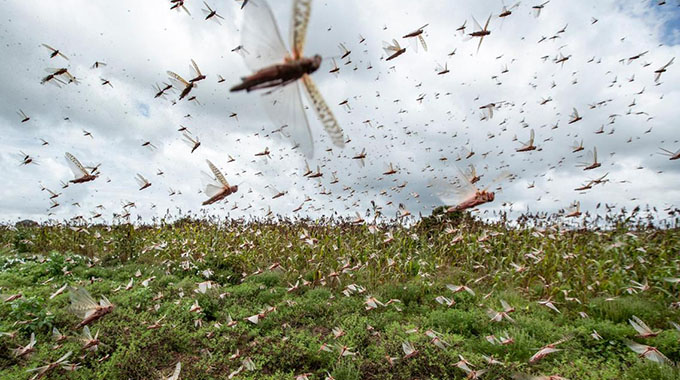 It never rains but pours for Chilonga villagers in Chiredzi, who after being threatened with eviction to pave way for a lucerne production project, also face hunger after their grain crops were destroyed by locusts over the past three weeks

The Shangaan community, which specialises in livestock and small grains farming, faces food shortages after large swarms of locusts devoured the crops.

Villagers who spoke to NewsDay at the weekend said they had given up after realising that they were failing to contain the locusts.

Ruspolia differens are regarded as a delicacy in most parts of the country and have brought about brisk business in Chiredzi.

Armoured ground crickets are found in some parts of Angola, Namibia, Botswana, Zimbabwe and South Africa.

Village head Philemon Vhelemu said if urgent steps were not taken to deal with crickets, villagers were likely to face starvation at the end of the farming season.

“This is a serious challenge to all villagers because all the effort they have put has gone to waste. We are now just looking in despair hoping for divine intervention,” Vhelemu said.

Headman Tiyani Chilonga said the situation was so dire that most people were sleeping in their fields trying to scare away the Ruspolia differens because they normally feed at night.

“If these villagers were not afraid to talk to strangers you could have interviewed some of them to appreciate the level of destruction caused by these locusts.

“As for armoured ground crickets, they have been here for a long time. We never thought they could cause such damage especially on maize.

“We never knew they could be so many and destructive. We have engaged our MP so that he can also engage his superiors in government. We wish they can find a pesticide to fumigate these insects before the situation turns nasty.

“The situation has reached an alarming level. If we ignore it, people will definitely face serious food shortages.   So we are urging everyone to buy pesticides on their own instead of waiting for the government. I have engaged specialists in that field. We, however, cannot wait for them to take action while we are losing crops. That’s why we are urging villagers to buy their own pesticides,” Gwanetsa said.