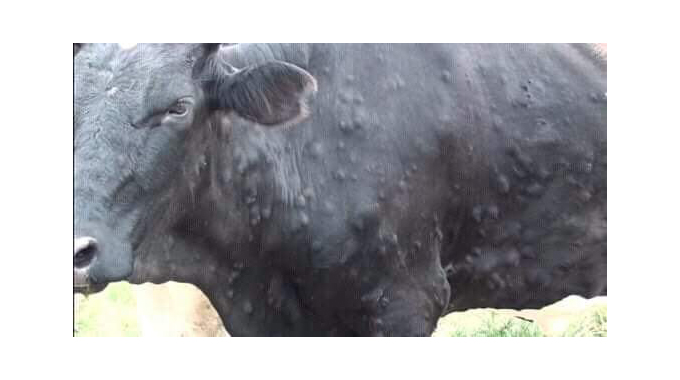 Judith Phiri, Farming Reporter
WIDESPREAD cases of the lumpy skin disease have been reported in Matabeleland South and North provinces which has resulted in the death of livestock especially cattle.

Lumpy skin is a viral disease spread by mosquitoes, particularly during the rainy season. Symptoms include fever, discharge from the eyes and nose, skin lesions, edema of the limbs, and swollen lymph nodes. According to the Matabeleland South provincial Department of Veterinary Services February statistics, from 400 cattle affected by lumpy skin disease, 12 have died. Beitbridge District was reportedly the worst affected in the province.

In an interview with Sunday Business, Matabeleland South provincial officer in the Department of Veterinary Services, Dr Enart Mdlongwa said the disease was caused by heavy rains experienced this season.

“Lumpy skin disease is affecting every district as we speak. We are still gathering more reports from all our districts about the outbreak of lumpy skin disease. On average we are getting five to 10 cases reported every week and there can also be an issue of under-reporting and the cases might be more than that,” said Dr Mdlongwa.

He also noted that there were no isolated places, it was basically more cosmopolitan within the province and some people had lost some of their animals.

“Lumpy skin is not a disease you can treat when an animal has been infected. The only thing that you can do when an animal is infected is to give it antibiotics for secondary bacterial infection. But the advice which we always give to farmers is that when the rains are about to start around August or September, they need to vaccinate their animals against lumpy skin disease so that when the rains come around October or November animals would have generated enough antibodies towards the disease, that way they are not going to pick the disease.”

Dr Mdlongwa discouraged farmers from trying to vaccinate the animals at the height of infection. Matabeleland North provincial Department of Veterinary Services statistics showed that the province has received about 122 reported cases since the onset of the rainy season 2020/2021 with 60 cases being reported in February this year. In February, Hwange reported 39 cases, Umguza had 14 and Binga with four. Matabeleland North provincial officer in the Department of Veterinary Services Dr Polex Moyo said 60 cases were reported in Matabeleland North in February and the mortality rate ranged from five to 10 percent of the cases.

“In Matabeleland North 60 cases were reported in February this year. This disease makes the animal uncomfortable, unable to eat well and so forth and the mortality ranges from maybe five to 10 percent of the cases. The number of cattle affected by lumpy skin disease has gone up and the disease is widespread within the province,” said Dr Moyo.

He also noted that even though the disease was widespread, it was a low mortality disease, with about 10 percent of the herd being affected by lumpy skin disease.

Department of Veterinary Services chief director Dr Josphat Nyika said they were still investigating to find out the areas where the incidents were occurring.

“Lumpy skin disease is a seasonal disease caused by biting insects such as mosquitoes and house flies, among others.

Biting flies can also breed during the season as they will be plenty of them feeding on cattle blood so those are the ones that carry the lump skin disease virus. We are yet to gather information and compare the cases from the previous year and this year so that we figure out if it could have been due to increased rainfall or other issues,” said Dr Nyika.

He urged farmers to vaccinate their cattle before the rainy season, saying they can even start in August as vaccinating in December would be late.

“The vaccine lasts for a year or so if you inject your cattle, you can re-vaccinate the following year. So that is the cost-effective way of dealing with the lumpy skin disease. There are other diseases that are also prevalent during this time of the year such as the January disease and tick-borne diseases so it is advisable that farmers dip their livestock to protect them from such diseases.”