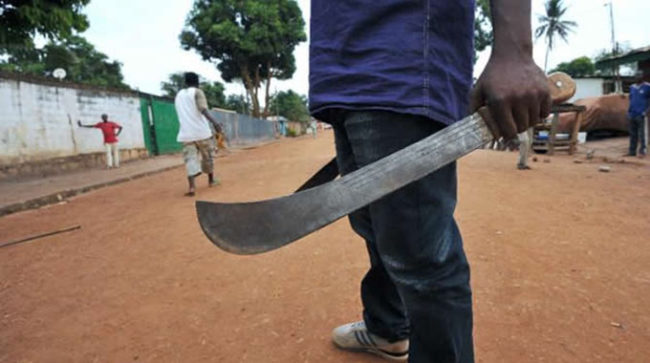 ZANU PF created the notorious machete-wielding artisanal miners who have wreaked havoc across the country by liberalising the mining sector, a ruling party MP has said.
Last week, President Emmerson Mnangagwa publicly tasked Chegutu West MP Dexter Nduna (Zanu PF), to end the chaos in the artisanal mining sector, raising speculation that the parliamentarian was responsible for the machete wars that have unsettled the country.

Norton legislator Temba Mliswa (Independent) claimed Nduna was exposed and denounced by Mnangagwa at a function in Norton on Friday, where he was “implicated” in the machete problem.
But speaking to NewsDay yesterday, Nduna, however, said he had lobbied in Parliament for the artisanal miners to operate freely and take their gold to Fidelity Printers and Refiners without being criminalised, but admitted that there were some criminal elements using machetes in the process.

He said that there was an unsigned truce between government and artisanal miners for them to mine wherever they want as long as they take their gold to Fidelity.
As a result, Nduna said, the artisanal miners were operating freely even in claims they do not own and admitted this could have led some of them to engage in criminal activities.

The action by government has led to groups, one of them calling themselves “MaShurugwi”, going around mines across the country and mining, not before killing and harassing other people.
“The whole of the 8th Parliament I fought for the rights of the artisanal miners and government responded, in particular His Excellency, when he was leader of government business when he was Minister of Justice; he responded by making sure that the small-scale miners and artisanal miners were allowed to sell their gold to Fidelity. No questions were asked because the issue was that a lot of gold was being leaked and there were illicit outflows,” Nduna said.

“Where there was no one working, they were allowed to have a moratorium. At the time, we thought the Mines and Minerals Act would be in place, but it has not come to Parliament, but there is an undeclared truce between government and artisanal miners to work on whichever claim and to bring gold to Fidelity, which is what is happening. In so doing, now we have people, criminals, who attack each other there and the person who these people listen to and has been championing issues to do with artisanal miners is
myself.”

The Chegutu West MP said he was in 2018 introduced at a campaign rally by Mnangagwa as “mukorokoza mukuru” because he was lobbying for them to be recognised.

“He easily would have called upon the Zimbabwe Miners Federation to actually intervene and make sure that the artisanal miners or vanhu vemabhemba (machete gangs) do not cause mayhem, but he directed his instruction to me because he knows that if I go on radio, into Parliament and physically go on the ground to address artisanal miners to say take your gold to Fidelity, they will respond. First and foremost, get identity documents, that is the second issue, because a lot of them do not have IDs. So it is easy for them to engage in criminal activities because they know they can never be accounted for,” Nduna said.

“If you look at where these artisanal miners and small scale-miners mined and where their mines are, there is nothing, it’s just the name. They don’t have mines, no claims and I applaud His Excellency for recognising these people and saying they should bring their gold to Fidelity and no questions are asked,” he said.

The Chegutu West legislator added that law enforcement agents had previously made life difficult for the small-scale and artisanal miners and those found in possession of gold would get a custodial sentence.