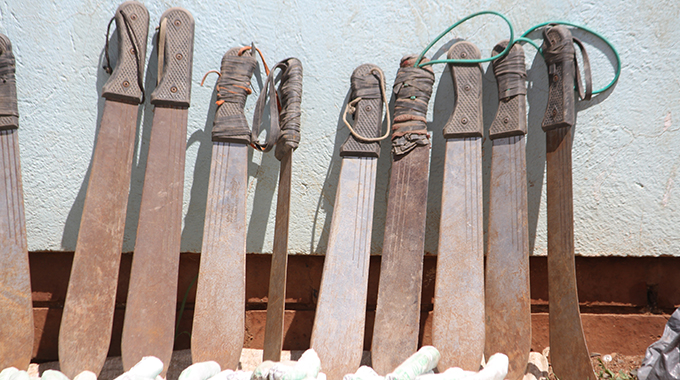 Eight machete-wielding gangsters, including a Harare City Council employee, have appeared in court facing charges of armed robbery and unlawful possession of firearms.

The gang was arrested after allegedly robbing Progress Manyeme in Marimba Park a fortnight ago.

They were not asked to plead and were remanded to January 24 with the option of applying for bail at the High Court.

Prosecutor Ms Patience Chimusoro told the court that on January 5, the eight — armed with machetes, knives and three pistols — went to a house in Marimba Park.

“Once there, they knocked the door of a house belonging to Progress Manyeme, who is the complainant,” the court papers show.

“Manyeme opened the door and one of the accused asked him the whereabouts of his relatives. Once Manyeme confirmed that he was alone, the rest of the gang attacked him with the various weapons while demanding to be shown where his relative kept their money.”

The court further heard that the gang then dragged Manyeme inside the house.

The suspects ransacked the house and found a metal case containing 13 000 rand, which they stole, the court papers state.

It is alleged that the gang also went away with several pairs of shoes, a massaging machine, sunglasses, three leather jackets, four cellphones and keys to a Mercedes- Benz.

The value of the stolen goods is estimated at US$3 820.

Last week, detectives from CID Homicide received a tip-off that Dzingai was involved in the matter, leading to his arrest in Aspindale.

Upon arrest, he divulged the identities of his accomplices.

Property worth US$120 has since been recovered.