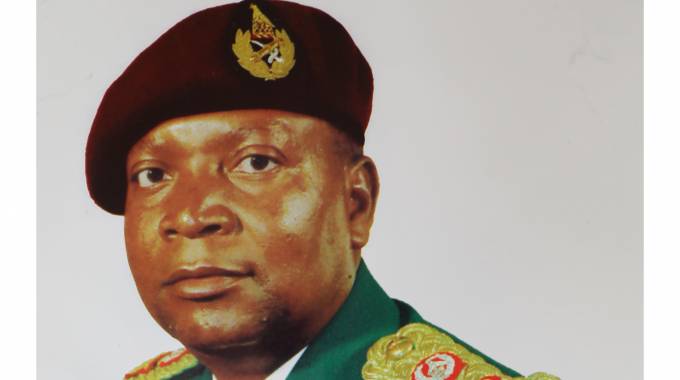 Vice President Kembo Mohadi made the announcement at the family home in the capital yesterday.

“We got a request from the Commander (Zimbabwe) Defence Forces and the Generals, requesting that Major-General Mugoba be declared a national hero, and it was unanimously agreed that he be conferred the national hero status,” he said.

“So, we have been sent by President Mnangagwa to come and tell the Mugoba family that Major-General Mugoba — the one that is no more, the one that is departed — has been declared a national hero. So, from now onwards, Government will take over everything happening here through the Ministry of Defence; Home Affairs and other departments,” he said.

In an interview yesterday, Defence and War Veterans Affairs Minister Oppah Muchinguri-Kashiri said the country has lost a selfless cadre, who liberated the country and defended its sovereignty.

“We have lost a national hero, especially if we look at the journey that he walked, from liberating the country from colonial rule to defending the independence of the country,” she said.

“Mugoba fought the harsh, brutal colonial system which sought to oppress the black majority. He fought for democracy, the black person’s dignity and rights.

“Together with his peers, they sacrificed their lives to liberate the black masses that were under colonial rule. I worked with him in Mozambique at Chimoi until he went to Tanzania for training, sacrificing a lot in his life.

“Even after independence, he continued to defend the sovereignty of the country. He valued peace and would carry out developmental projects.”

Minister Muchinguri-Kashiri said Major-General Magoba’s professionalism and achievements was also celebrated across the continent as evidenced by his appointment as Chief of Staff in the office of the (AU) Commissioner for Peace and Security in Africa.

She said the Zimbabwe Defence Forces was very proud of his accomplishments.

Major-General Mugoba, whose nom de guerre was Joseph Zulu, was born on November 2 1959 in Magwazi Kraal (Maranda Tribal Trust), in the Midlands province.

He did his Grade One and Two at Chipinda Primary School in Mberengwa from 1966 to 1967.

He moved to Rambakuriwa Primary School in Chivhu, where he did his Grade Three to Five from 1968 to 1970, after his father had bought a farm in the area.

He went back to Mberengwa, where he completed his primary education at Chabwira Primary school.

Upon completing his primary education, he went to Chegato Secondary School in Mberengwa.

He joined the liberation struggle when he was doing his Ordinary level studies in 1977.

He got his basic training at Takawira Training Camp and in August 1977, he was posted to Chimoio headquarters, where he was employed as a medic.

In 1978 he went to Nachingwea, Tanzania, for further training, after which he was appointed as an instructor at the same camp due to his dedication to duty.

After independence, he held various positions until he was promoted to the rank of Major-General in 2007.

He was later appointed Chief of Staff (Administration and Quartermaster staff) in 2008.

In January 2015, he was appointed Chief of Staff (General Staff) and it was during this time that he was appointed General Officer commanding Sadc Special Forces exercise, which was held in Kariba.

In October during the same year, he led Exercise Amani Africa 2, which involved the whole African continent.

In 2017, he was seconded to the African Union headquarters as the Chief of Staff Africa Standby Force in Addis Ababa, Ethiopia, a post he held until the time of his death.

Maj-Gen Mugoba’s body will depart for Featherstone today at 3pm.

On Monday, it will leave the Wiltshire family farm for One Commando Barracks in Harare, before a military parade is held at Parachute Regiment the following day.

He will be buried at the National Heroes Acre on Wednesday.