THE majority of MDC Alliance legislators continued their snub of Parliament business yesterday, with the exception of three MPs who defied their party directive and attended portfolio committee meetings. 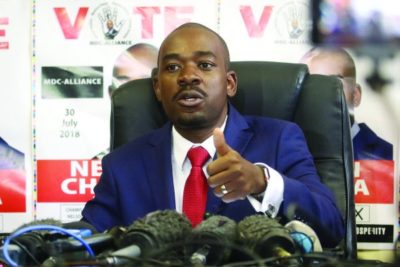 The Nelson Chamisa-led MDC Alliance last week resolved to disengage from Parliament inrotest over the recall of its four legislators by the Thokozane Khupe-led MDC-T.

The recall followed the Supreme Court ruling that declared Khupe as the acting president of the party, and that Chamisa, who outfoxed her in the race to succeed the late party founder Morgan Tsvangirai, was illegitimate.

After the ruling, Douglas Mwonzora and Morgen Komichi immediately crossed the floor to Khupe’s camp and recalled four MDC Alliance MPs to assert their authority on the opposition party.

Chamisa’s national standing committee last week resolved to temporarily withdraw MDC Alliance MPs from Parliament in protest over the recall that has divided the party.

Tekeshe was absent during the committee meeting but later turned up to address the media.

Komichi, who is at the centre of the MDC fights, was seen milling around Parliament to attend a subcommittee meeting of the Standing Rules and Orders Committee. Tekeshe defended his decision to continue attending Parliament sessions.

“I am not against that directive, but I feel I cannot be called names because my conscience is clear that I represent my people and I am very much part of the MDC Alliance. I have not jumped ship.”

Makonya and Mafuta claimed that they belonged to Tsvangirai’s MDC-T.

Newer Post
Settle your US$ debts in US$: High Court
Older Post
COVID-19 judgments must be complied with