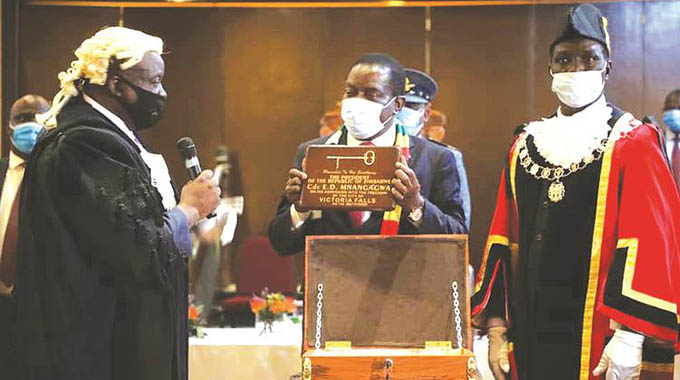 President Mnangagwa receives a scroll in acceptance of the Freedom of the City of Victoria Falls while Mayor Councillor Somveli Dlamini and Town Clerk Mr Ronnie Dube look on yesterday. — Pictures: Eliah Saushoma

Leonard Ncube
Victoria Falls Reporter
As Victoria Falls entered its new city status in a colourful ceremony presided over by President Mnangagwa yesterday, it obtained the extra power of managing its own water supply instead of buying bulk supplies from the Zimbabwe National Water Authority, a power it has been seeking for some time as it upgrades services.

The President said the Second Republic strives to make Victoria Falls the best destination in the world, hence the need for new city to control its own water supply.

Zinwa presently is responsible for pumping bulk raw water from Zambezi River into a reservoir, from where the council treats and distributes to residents.

An official proclamation for the city status through a proclamation gazetted in terms of the Urban Councils Act was made by President Mnangagwa on Monday before activating the new city in the ceremony in Victoria Falls yesterday.

The conferment of the city status, buttresses greater Victoria Falls development as a key component of transforming Matabeleland North and the whole of Zimbabwe into an upper middle-income economy by 2030 and cements its status as the conference and tourism capital of Zimbabwe.

Over the years, Zinwa had come under fire from Victoria Falls residents over recurrent erratic water supplies. The city council attributed perennial water challenges to Zinwa’s lack of capacity to manage water supply and petitioned Government saying it had better capacity than the water authority to solve the water problems.

Local Government and Public Works Minister July Moyo dispatched a commission to assess council’s preparedness, and a greenlight was given for Zinwa to cede rights to council.

However, he said the Victoria Falls City had a different case because it is the gateway into Zimbabwe.

“I am informed that provision of water was hitherto a shared responsibility between Victoria Falls Council and Zimbabwe National Water Authority. Informed by the culture of the Second Republic of working in common purpose, Zinwa and local authorities should forthwith seek greater collaboration with regards to harnessing skills, competences, technical know-how and equipment,” said President Mnangagwa, much to the excitement of the delegates made up of various council stakeholders.

“I then direct the Minister of Local Government to ensure that he begins the process to make sure that the council takes the responsibility of supplying water. This inclusive approach will serve to enhance the delivery of quality services for the benefit of ratepayers and ultimately attract increased investments in line with the Zimbabwe is open for business mantra. We want to make sure Victoria Falls is best and therefore the council must have control over supply of water.” The President said Government has high expectations that Victoria Falls City will continue on its vision and mission to provide high quality services which maintain the uniqueness, natural ambience and competitiveness of the city as a premier tourist destination.

the tourism sector and other ongoing national investment, trade and modernisation programmes.

“The city must honourably acquit its duties and rise to the new, weighty and multifaceted responsibilities which come with the status,” he said.

Council is working on a $12 million water, sanitation and hygiene programme to improve water management in the town, which will lead to the construction of a reservoir and other water infrastructure. The President unveils a remembrance plaque at the council offices

The takeover of water rights will be a huge relief to Victoria Falls residents who have been pressing the city fathers to wrestle the rights from Zinwa.

An excited Town Clerk, Mr Ronnie Dube, said the handover of water rights was an achievement for the council.

“I am glad that His Excellency (President Mnangagwa) made a pronouncement that we have to take over the entire water delivery service as a local authority.

“That is going to improve the livelihoods of our people because we are now going to be accountable to them. We had serious challenges when we could not meet the demand caused by lack of supply of raw water. As a local authority we have a takeover plan and budget of which we expect to get transitional grant from Government to ensure smooth take-over of water from Zinwa,” said Mr Dube.