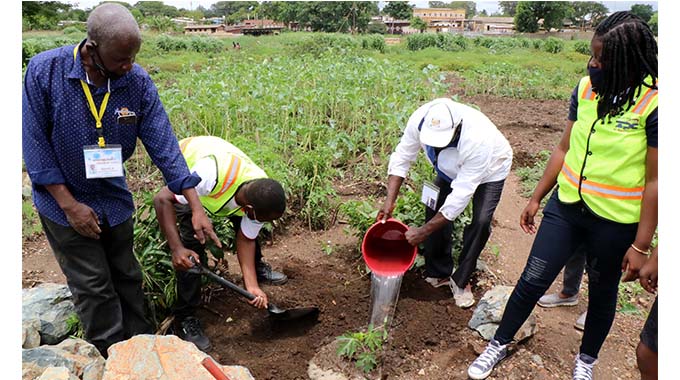 Judith Phiri, Sunday News Reporter
RESIDENTS of Bulawayo’s oldest township, Makokoba have been urged to continue planting and conserving trees to help in the preservation of the environment and to counter the damaging effect of deforestation in the country.

Over 40 fruit trees were planted in Makokoba suburb along Mazayi River yesterday in commemoration of the National Tree Planting Day.

The trees included lemons, papaya, indigenous ones such as umnyiyi (bird plum), uxakuxaku (snot apple) and the national tree, baobab.

Zimbabwe Power Company (ZPC) Bulawayo risk manager Mr Willing Shoko said they donated the trees to the residents to encourage them to conserve the environment.

“As we commemorate the National Tree Planting Day like other countries in the world, we encourage the people of this area to conserve the environment and protect their gardens by planting these trees which will go a long way in improving stream bank cultivation,” said Mr Shoko.

Forestry Commission forestry extension officer for Bulawayo Miss Nokuthaba Nyathi said the fruit trees were important for the environment and in line with their theme of fruit trees for food security and nutrition.

“Fruits trees will improve the nutrition of this community, they are also reaping the benefits of planting and preserving the soil. When the rain comes the gardens will not be greatly affected as the roots bind the soil, less soil will be washed off, hence less land degradation,” said Miss Nyathi.

She said since people are already producing vegetables on the river catchment areas they can put trees to arrest soil erosion.

Ward 7 councillor, Shadreck Sibanda said planting of trees was important for the environment which was slowly becoming a desert.

Meanwhile, Clr Sibanda said to ease water shortages among the people of Makokoba and surrounding areas they had rehabilitated two old boreholes at Thokozani Flats and Barbourfields.

Also, they were working with the Bulawayo City Council to help the less privileged in Makokoba in urban agriculture. Over 100 families have benefited from the programme.

“The council identified the land and provided it to them so that they can be able to do gardening. As you are aware Makokoba is congested and most of the yards do not have space for gardening. So with the availed land, people are able to sustain their lives through agriculture,” said Clr Sibanda.