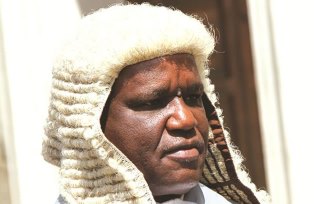 HARARE – Chief Justice Luke Malaba had a torrid time in Parliament yesterday after the opposition legislators tried to stop him from swearing-in speaker of the National Assembly Jacob Mudenda and his deputy Tsitsi Gezi.

Malaba was embarrassed when he entered the National Assembly chambers as the MDC Alliance MPs started to sing “mbavha, mbavha” (thief, thief), some were shouting hatidi Malaba muno imbavha (we don’t want Malaba in here he is a thief).

Malaba was forced to delay the swearing-in by nearly 20 minutes as opposition MPs jeered and sung slogans.

The ruling party MPs tried to retaliate by shouting “ED Pfee” but that was not enough to silence the opposition legislators who were now dancing and singing.

After some minutes, Malaba rose from his chair and started the swearing-in process.

However, the defiant opposition legislators went in front of Malaba singing “Ndikafunga vote yangu ndinorara ndigere”  (I will find it difficult to sleep if I think of my vote).

Despite the disruptions, the under fire chief justice eventually swore in Mudenda and Gezi despite the heavy resistance shown by the opposition legislators.