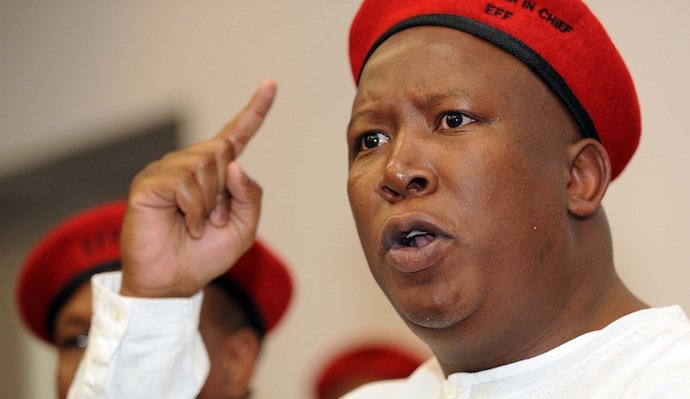 SOUTH African opposition party Economic Freedom Fighters (EFF) leader Julius Malema yesterday slammed President Emmerson Mnangagwa for allegedly “reversing the gains of the revolution”, especially on land and warned that the Zanu PF leader might fail to complete his term of office if disgruntled Zimbabweans decide to turn against him.

Malema told journalists in Johannesburg that by offering to compensate white former commercial farmers for land lost during the fast-track land reform programme, Mnangagwa had gone against the spirit of the liberation struggle.

“It’s a sellout position. The way he is going about it, he is not going to finish his term,” Malema said.

“That country (Zimbabwe) is swimming in a pool of poverty; they can’t afford basic things like primary health, proper education and infrastructure. He gets money and goes to give it to people who are not deserving. He is reversing the gains of the revolution struggle. It’s unsustainable.”

Early this week, government tabled a ZWR$53 million part payment for the estimated 4 500 white farmers who lost their farmland in the chaotic land reform programme in 2000 under former President Robert Mugabe. The land was redistributed to over 300 000 new farmers, mostly Zanu PF supporters and war veterans.

Finance minister Mthuli Ncube this week announced that farmers would soon start receiving their payments while a full package, amounting to more than $30 billion required for the exercise was being mobilised. But Malema said the ex-farmers did not deserve such compensation.

“They do not deserve any compensation. Mnangagwa is a sellout. We thought he was going to bring a fresh air in Zimbabwe, but he is continuing to be worse than what we have experienced before. Very soon, the people of Zimbabwe will turn against them and he won’t have anywhere to run,” he said.

Malema’s EFF is pushing South Africa to expropriate land without compensation, arguing that whites grabbed land from blacks without paying for it.

“He (Mnangagwa) is the President of Zimbabwe and he was elected in that position by the people of Zimbabwe. We cannot entertain any comment from people who have no relevance to our political discourse. You don’t interfere in our internal affairs,” he said.

Information deputy minister Energy Mutodi last night told NewsDay that the Mnangagwa-led government’s move was meant to mend broken relationships with the Western countries since the land issue was at the centre of Zimbabwe’s fallout with the West.

“Government is clearing all obstacles that have hampered cordial and co-operative relations with Britain and the whole European Union bloc. The Second Republic is focusing on re-engagement,” he said.

Mutodi said the motive was to win investors’ confidence.

“The compensation of the former white farmers is necessary to instil investor confidence. We are implementing a number of reforms that ensure that we create a clear break from the past and lay a firm foundation for investment. That is the (direction) this government has taken,” he said.

“We are compensating for improvements and not for the land itself and it’s only fair that we handle the land issue in that manner so as to bring finality to the land reform exercise that has caused a lot of disquiet and lack of confidence in our commitment to the rule of law.”

Government hopes that the compensation offer would help to persuade the United States government to lift sanctions on Zimbabwe.

The amended Zimbabwe Democracy and Economic Recovery Act, first passed in 2001, says in part: “It is the sense of Congress that the government of Zimbabwe… should enforce the Sadc Tribunal rulings from 2007 to 2010, including 18 disputes involving employment, commercial, and human rights cases surrounding dispossessed Zimbabwean commercial farmers and agricultural companies.”

The farmers took their dispute over land dispossession to the Sadc Tribunal, and won, but government in 2011 influenced other regional countries to suspend the tribunal, established in 2005. It was re-instated in 2014 under a new protocol which limited the jurisdiction of the tribunal to only hear cases between member states, such as disputes over water or territory, rather than cases brought by individuals against states, such as human rights violations.

Information ministry secretary Ndavaningi Mangwana said government was being guided by the Constitution.

“Mr Malema’s comments are ill-informed and they betray a failure to grasp Zimbabwe’s policy regarding land reform,” Mangwana said.

“But that’s quite understandable because when one plunges into the domestic affairs of a neighbour based on tittle tattle on social media, their chances of getting it very wrong are amplified as is the case here. Zimbabwe’s policy is a very fair one. Our policy is not to compensate for land, but for farm improvements. The money set aside by the government in the budget is to pay for that. Now if anyone believes that it’s right not to compensate for a house, an irrigation system, barn, borehole or school, then their moral compass is skewed and we have to question their sense of right and wrong.”