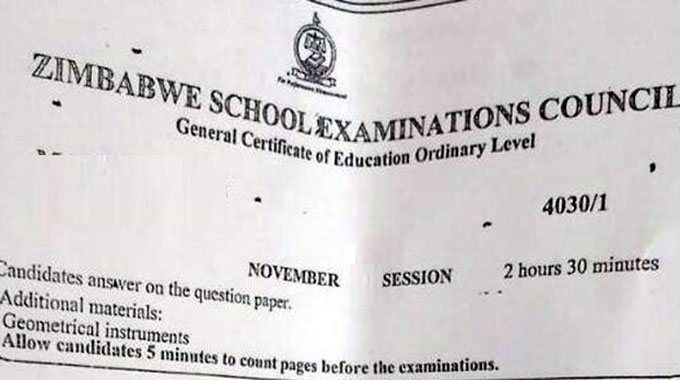 Prosper Dembedza
Court Correspondent
Police are hunting down buyers of Zimsec Mathematics and English examination papers stolen by a worker at the Zimsec printing works who was arrested and brought to court on Saturday.

He allegedly stole the O-Level papers 1 and 2 for Mathematics and English, two crucial subjects.

The State led by Mr Lancelotte Mutsokoti opposed bail, saying there was overwhelming evidence against Maimba and considering the jail term he faced, this could induce him to flee from justice.

His bail application will continue to be heard today.

The court heard that on November 27, Maimba stole a copy of O-Level Mathematics papers 1 and 2 at his workplace and hid them under his jersey before he went home.

He then allegedly sold the papers to a prospective candidate before the examination date.

A week later, on December 3, Maimba was once again at work and stole the O-Level 2020 English papers 1 and 2 and again smuggled them out under his jersey.

Again he sold them.

Investigations led to Maimba’s arrest and he led the police to the recovery of all the papers and the identification of people he had sold the papers to.