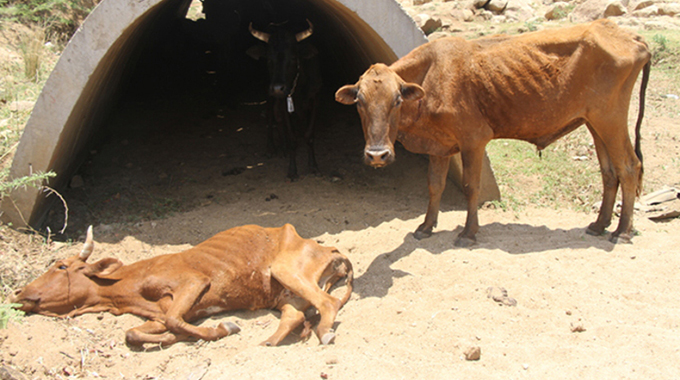 Beaven Dhliwayo Features Writer
Droughts and dry times are part of the Zimbabwean farming enterprises.
An article carried by The Herald on January 13 pointed out that at least 16 000 herd of cattle have succumbed to drought in Matabeleland South, amid growing fears of a looming water shortage in some parts of the province as water bodies are fast drying up.

It is not the first time drought has claimed a lot of livestock in the country.
For instance, in 2016, the then deputy Minister of Agriculture, Paddy Zhanda, confirmed that at least 19 300 cattle died because of drought.

In November 2019, statistics from the Department of Veterinary Services (DVS) showed that nearly 1 200 cattle and 35 donkeys succumbed to drought that has seen pastures dwindle and water sources dry up.
The numbers are nerve-wrecking.

Hence mitigation measures are a necessity in order to save cattle and other livestock.
Cattle are a crucial component in the country’s beef and milk production.

It is also worrying that affected farmers are selling cattle for a song considering that their herds continue to succumb due to the drought.

Although droughts are often unpredictable, they are inevitable in many regions, so long-term farm and ranch management must include planning for and consideration of how drought will affect the entire system — including plants, livestock and water sources.

Recurring droughts have become a natural part of the climate in Zimbabwe, creating many challenges when managing grazing and forage resources.

Dry spells result in increased costs, decreased production and income and increased mental and physical strain on those affected.

The Noble Research recommended that agricultural producers and other natural resource managers should keep strong records, evaluate their operations, plan for the future, and act accordingly at all times, especially during drought.

Periods of drought entail those who rear livestock to make important decisions that will have short-term and long-term impacts on their farming enterprise.

The world over, droughts offer sleepless nights to farmers, but planning and management based on sound information will help producers through the experience.

Both communal and A1 farmers should know what livestock they can afford to feed through to the expected break and gain an appreciation of what the value of their livestock is in the current market.

This, according to livestock experts allows for a realistic assessment of the relative merit of management strategies such as selling, agistment and feeding.

With the entire Southern African region is expecting below average rainfall for the 2019-2020 cropping season, crops and yields will be affected sharply, so is the natural grazing grass.

Thus the animal welfare is critical considering that feed and water resources are under threat and livestock farmers must always act in a way that delivers good animal welfare outcome, even if that means destocking.

According to The Cattle Site, in its article titled, “Beef management in times of drought” farmers should have a drought plan in place that identifies which group or class of livestock will be de-stocked first, if necessary.

Reducing livestock numbers to match available forage supply may include sending animals to rented pastures in other locations where moisture and forage production has not been impacted by drought.

The Cattle Site also points that calves and/or cows may be removed from pasture and fed conserved forages, crop residues and/or grain in confinement (known as dry lotting).

Yearlings may be marketed earlier than originally planned; calves may be weaned early, while dry cows can then be maintained on lower quality pastures or with supplemental feed sources.

Farmbuzz Agriculture Solutions chief executive officer Anesu Mapisa told The Herald that it is time farmers start growing fodder crops to replace natural pastures, so as to sustain their livestock.

“There is a simple way of growing these fodder crops by means of hydroponics where even farmers without much land and water supply can use,” he said.

“Hydroponics is a technique where seeds like barley can be put in trays which will be placed to float on water and they start to grow at a much quick rate than on soil.

“With this climate changing every season, farmers should start to look at these alternatives.”
Additionally, Mapisa encouraged that farmers should supplement livestock with natural ingredients like Moringa seeds which can be mixed with other feed just to increase the nutritional value.

When managing through a drought, farmers are encouraged to consider combining groups of animals to encourage grazing of less desirable plants, and grazing pastures with species that are more tolerant of increased grazing pressure.
Extended rest periods and increased recovery times are also necessary to protect plants during dry periods.

Also feed testing and water testing are especially important during times of drought, because toxic or poisonous plants are more likely to be grazed during dry years as forage sources become depleted and grazing animals search for plants to graze.
This can include chokecherries and locoweed, among others.

In their drought plans, farmers are encouraged to identify the group or class of livestock to be de-stocked first if necessary and at what point each group will be removed if the drought persists.

Drought management strategies should be a permanent part of every grazing plan.
Farmers now need to cut herds by selling unproductive cattle and use the proceeds to buy stock feed for the remaining livestock.

Going forward, farmers should not watch their cattle perish for the sake of maintaining their herd.
In African societies, cattle are considered as a form of wealth, hence that is why many farmers in the country are losing their cattle in these dry times.

But it won’t work in this moment where drought is ravaging the country.
Farmers should simply de-stock.
Agricultural experts agree that although the quality of meat has gone down, it is better to sell at a lower price than to lose the whole herd to drought.