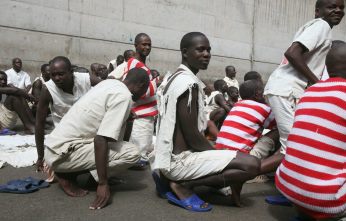 HARARE – There are massive human rights violations in the country’s prisons, a report by Zimbabwe Human Rights NGO Forum has revealed.

In the report released last week, Zimbabwe Human Rights NGO Forum exposed human rights violations that include; overcrowding and food shortages among others.

“Persons deprived of their liberty are entitled to the right to dignity and cell conditions and sanitation must be consistent with this right. There was overcrowding in some prisons and the risks of disease outbreak and spread were very high.

“There were shortages of detergents, soap, body lotion, and other washing aides were rarely adequately supplied and inmates relied on what they received from relatives and well-wishers.”

The report said at many prisons, the inmates used buckets to flush human waste either because of water shortages or because the flushing system for the toilets had not been repaired.

They said at Mutare Farm Prison, lice were becoming a serious problem and there was need for fumigation to fix the situation.

“These conditions violate the prisoner’s right to be placed in conditions of detention that are consistent with human dignity as provided for in international instruments and section 50(5)(d) of the Constitution.

“The rights to adequate food and clean water are recognised by several international human rights instruments and the Constitution as part of the class of rights that are extended to ‘everyone’ and as a specific right to be enjoyed by detainees.”

The report also revealed that at many of the prisons, inmates are treated from rooms with no privacy or from buildings with inadequate storage space for medication.

The organisation noted that all prisons had a shortage of ordinary clinical staff, let alone specialist staff such as psychologists, social workers, specialist doctors and the like.

Another trend that emerged from the report was that the majority of staff servicing prison clinics were non-residents.

“With regards to education, vocational training and work, it is worth noting that prisoners do not forfeit their right to education by virtue of their committal to custodial institutions.

“Notwithstanding the fact that all the 23 juveniles detained at Harare Remand Prison were of the school going ages, there were no learning programme or facilities. The absence of educational programmes and learning facilities violates detainees’ and prisoners’ right to education.”