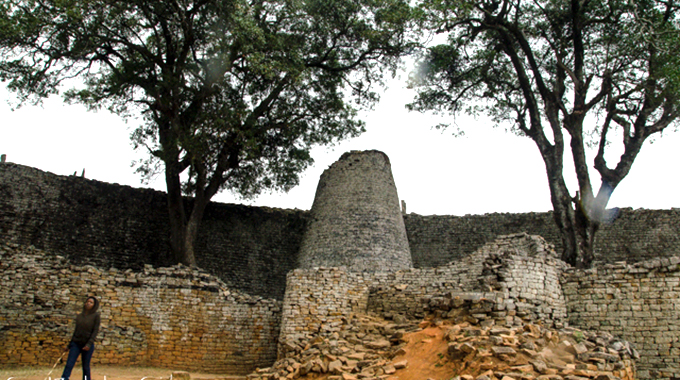 George Maponga
Masvingo Bureau
A dispute between three prominent chiefs over jurisdiction of the Great Zimbabwe monuments continues to rage and has sucked in their subjects who are now also at loggerheads over who has dominion over the historic site.

While the battle for control of the monuments is now largely academic because the monuments are now a national heritage site under the custody of the State, the dispute continues to simmer within the Charumbira, Murinye and Mugabe families.

Great Zimbabwe is under the stewardship of the State through the National Museums and Monuments of Zimbabwe (NMMZ).

Chiefs Charumbira (Shumba Sipambi), Murinye and Mugabe (who are both of the Duma Moyo) totem are in disagreement over the jurisdiction of the iconic monuments.

This comes as Great Zimbabwe has been hogging the limelight over proliferation of illegal settlements that are encroaching into the world heritage site. The settlements are blamed on unscrupulous village heads illegally parcelling out land.

Discussions at drinking spots and other gatherings within communities are dominated by various theories trying to explain the rightful traditional authority in charge of Great Zimbabwe.

Chief Murinye’s backers argue that the monuments fall under his jurisdiction since the founding Chief Murinye sired Mugabe who was his third-born son.

They said Mugabe was the original Chief Murinye’s third eldest son after Shumba Chekai and Chikwanda and was actually allocated his present-day territory to rule by his father.

It is further alleged the original Chief Murinye first stayed in an area called Beza Ravakamira, east of the monuments near Lake Mutirikwi, before being forced away by white colonialists and resettled in the Mushandike area before moving again to the Great Zimbabwe monuments where he died.

Chief Murinye, Mr Ephias Munodawafa, said he was not at liberty to delve much into the jurisdiction of Great Zimbabwe monuments.

“I don’t want to say much about that issue, I am a qualified lawyer, but what I can tell you for a fact is that Mugabe was actually the original Murinye’s third eldest son who was given territory to rule by Shumba Chekai on the orders of the original Chief Murinye,” he said.

Chief Murinye qualified as a lawyer a few years ago and is building his homestead at Oartlands Farm, a short distance from the iconic monuments to the east.

This development has courted mixed reactions from communities in the area, with some claiming the move was an indirect attempt to stake a claim to the monuments.

His opponents said Chief Murinye’s claim to Great Zimbabwe was far-fetched as his boundary with Chief Mugabe was at Mupudzi River near Ancient City Lodge, which was away from the monuments.

Others even said Chief Murinye’s boundary with Chief Mugabe’s area was Mutirikwi River, which feeds into Lake Mutirikwi.

He said literature by white explorers and early missionaries vindicated his claim.

“It is clear even in all writings about Great Zimbabwe that the monuments fall under my area,” he said.

“Missionaries and explorers unanimously concur that when they arrived at the monuments around 1893, they found Haruzivishe, the great Mugabe ancestor there and in charge.”

Chief Charumbira intimated that under normal circumstances, Great Zimbabwe would fall under him since the place was under Nemanwa, who was a headman under Charumbira.

He said Chief Mugabe’s claims to Great Zimbabwe were far-fetched since his boundary with Charumbira was close to Morgenster Mission, away from the monuments to the south.

“I am a national leader for chiefs and don’t want to reduce my standing by discussing such issues,” he said.

“However, the truth of the matter is that Mugabe and Charumbira’s boundary is at Henry Murray School at Morgenster.”

This indirectly means he believes that none of the two chiefs can lay a claim to the monuments, leaving the area under Nemanwa, who is Chief Charumbira’s headman.