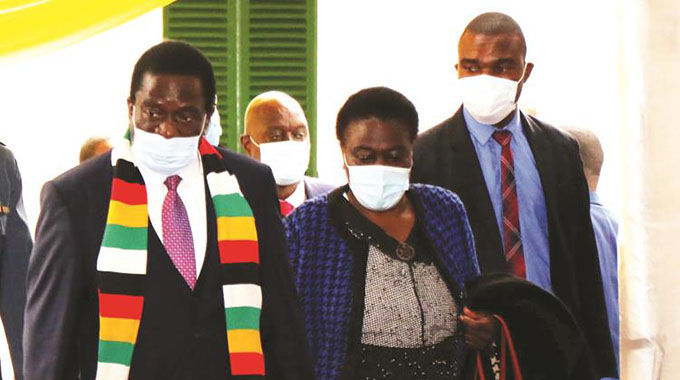 President Mnangagwa arrives at State House in Bulawayo for a meeting with civil society leaders from Matabeleland on Saturday in the company of the Minister of State for Bulawayo, Cde Judith Ncube. — Picture: Obey Sibanda

Fungi Kwaramba recently in BULAWAYO
Civic society organisations in Matabeleland have hailed President Mnangagwa’s commitment to tackling the emotive Gukurahundi issue as well as committing to solving the regional historical challenges through completion of stalled projects such as the Zambezi Water Project.

The President was in Bulawayo on Saturday and engaged local authority leaders as well as civic society organisations represented by the Matabeleland Collective.

During engagements with the two groups at State House in Bulawayo, he committed his Government to ending the challenges faced by the region.

President Mnangagwa directed relevant ministries and Government departments to ensure that resources were mobilised towards critical projects such as the Zambezi Water Project.

In an interview after the meeting, Ms Jenni Williams, leader of the Matabeleland Collective, a broad coalition of CSOs in the region, said the President had demonstrated willingness to solve problems bedevilling the region in a short space of time.

“His Excellency’s commitment is quite significant because this meeting was called at very short notice. His line ministries are coming in and we are moving,” she said.

“Unfortunately, we recently lost a key Minister of Lands and Water, Perrance Shiri. Now we are now waiting for the new minister to put his gloves on. The issue of Zambezi Water Project is one of the key issues for engagement.

“The equalisation of the people of Matabeleland must be realised through ensuring the completion of the Zambezi Water Project, that will make our people see that something is being done.”

At the meeting, the President said his Government will do less talking and more action.

Part of challenges from Gukurahundi is the significant number of people and families who need birth and death certificates. The issuing of these certificates to people in the region is set to be expedited through the coming in of the Registrar General’s office with mobile registration platforms.

“The President created a dispensation that they will ensure there will be free documentation for people who were affected by Gukurahundi and in general, the people of Matabeleland. Most of the issues have been addressed and we are now wanting to launch this project in Matopos, because that is the centre,” said Ms Williams.

what documents were needed, how they can be obtained and who can get them.

“Sometimes there are whole generations that don’t have birth certificates or any documentation. So as we identify the beneficiaries, the Registrar General will bring a mobile team to make sure the reality of a document in the hands of the people is actually realised,” said Ms Williams.

The Second Republic, under the leadership of President Mnangagwa, has made reengagement one of its key priorities and to this end, it has established a platform for dialogue with all parties, whether political players, churches or civic organisations.