‘Mbeki did not impose talks outside POLAD’ 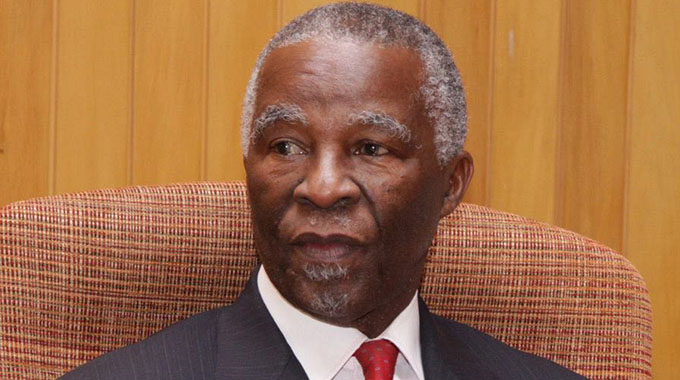 Political negotiations in Zimbabwe will continue to be held under the Political Actors Dialogue (POLAD) and former South African president Mr Thabo Mbeki has not indicated that talks be held outside this platform, President Emmerson Mnangagwa has said.

This comes as the latest edition of the POLAD dialogue will be held at President Mnangagwa’s Sherwood Farm in Kwekwe today, following a request by negotiators under the forum.

Following Mr Mbeki’s visit, there has been widespread speculation that the former South Africa president, who led negotiations for Zimbabwe’s Government of National Unity in 2009, will bring President Mnangagwa and Mr Chamisa to the negotiating table under a new platform.

The President once again invited Mr Chamisa to be part of the POLAD dialogue.

“He (Mr Mbeki) never pushed for talks when he met me. We are very old friends, indeed he discussed the political situation in the country and I explained to him that with regard to dialogue, we have a platform where every political party freely can come into that platform including MDC under Chamisa.”

Asked if there was a chance of meeting Chamisa under any other platform, the President responded: “That (POLAD) is the only platform where political dialogue will take place.”

In an interview yesterday, Deputy Chief Secretary in the President’s Office, Mr George Charamba, said the decision to take political dialogue to the Sherwood was made after the POLAD negotiators nominated the venue.

Further, it was agreed that a tour of the farm encourages productivity among all Zimbabweans regardless of political affiliation.

Said Mr Charamba: “It was a request made by POLAD members. The programme is very simple, a couple of hours of business and then another couple of hours touring the farm. So it is almost like a farmers’ field day after the serious business of talks.

“It does clinch the notion of productivity which has been the President’s watchword that we should work, work and work for our economy to grow.”

POLAD was launched in May this year and is convened by the National Peace and Reconciliation Commission, chaired by retired Justice Selo Nare.

Dialogue under POLAD is a culmination of an engagement process that was initiated by President Mnangagwa when he invited, for dialogue, leaders of the 23 parties that took part in last year’s elections.

The process is meant to foster unity and enhance nation-building.

Previous meetings have agreed that both political and economic reforms should be implemented while politically motivated violence should be shunned.

During his visit, Mr Mbeki expressed confidence in Zimbabwe’s capacity to resolve its challenges and reiterated his support for broad-based processes aimed at addressing issues of concern.