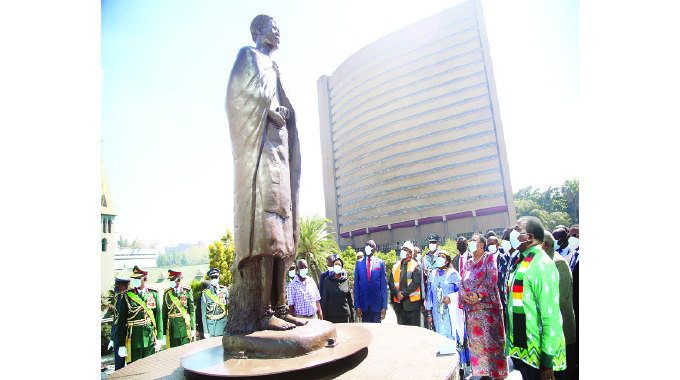 President Mnangagwa and other dignitaries (left) look at the statue of Mbuya Nehanda -Picture: Believe Nyakudjara

Immortalised through bronze, for future generations to gourd from history, the magnificent yet serene statue of Mbuya Nehanda stands tall like a guardian angel caring for the sons and daughters of Zimbabwe as they go about their business in Harare. It’s history cast in stone.

If the hands of time could be turned back, perhaps to 123 years ago, Zimbabweans and the world at large would catch a glimpse of where the iconic and inspirational legend used to quench her thirst.

But time has erased most of the lingering memories that will forever stand in the city of Harare, to inspire Zimbabweans.

Yesterday, Zimbabweans witnessed etching of history, as President Mnangagwa unveiled the statue of the inimitable and inspirational Mbuya Nehanda.

A symbol of resistance and defiance to colonialism and neo-colonialism, the statue is just the beginning, as the Second Republic strives to preserve the memory of the country’s heroes and heroines.

The monument is not only a tribute to Mbuya Nehanda, but many other leaders of the First Chimurenga such as Chingaira Makoni, Mapondera, Chinengundu Mashayamombe, Chiwashira, Mkwati and Sekuru Kaguvi and other early gallant leaders who fought colonial occupation and subjugation are all deserving of national recognition.

Their participation in coordinating resistance in various communities is also celebrated in this monument.

The busy intersection of Samora Machel Avenue and Julius Nyerere Way was a hive of activity as President Mnangagwa led a delegation that included Vice President Constantino Chiwenga, Defence and War Veterans Minister Oppah Muchinguri-Kashiri and other ministers, ambassadors, traditional leaders, members of the Politburo, Polad members and citizens to witness the occasion.

While the official ceremony was going on, the citizens who had come to witness the occasion broke into songs of the struggle, some ululated and some clapped, some almost went into trances as traditional leaders paid tribute to the great spirit medium.

On the main stage were Mbare Chimurenga Choir, Mbuya Stella Chiweshe and other musical groups that serenaded those gathered to witness the unveiling.

Before the unveiling of the statue, President Mnangagwa received a resource and library history book on Mbuya Nehanda titled “The Ultimate Sacrifice”, which depicts the spirit’s origins and also sheds light on the First and Second Chimurenga.

The book was compiled by a number of researchers and translators from the University of Zimbabwe including veteran African scribe Ankomah Baffour and published by Native Host Incorporated. Former Sunday Mail Deputy Editor Munyaradzi Huni edited the book.

The statue was erected at the intersection for a reason. It is the same place where Mbuya Nehanda used to drink water and rest at the springs that were originally there. Now the City Presbyterian Church stands at Mbuya Nehanda’s source of water.

President Mnangagwa said the colonialists’ attempt to destroy the nation’s history by closing the springs had not worked.

Dean of African Ambassadors Mr Mawampanga Mwana Nanga described the statue of Mbuya Nehanda as a symbol of culture. He called for the continent to embrace cultural revolution for Africa to prosper.

“Don’t just see it as a statue. This year the DRC President Felix Antoine Tshisekedi Tshilombo who is the African Union chairperson is the one who said that this year’s theme is that we need to revisit our culture, to know really who we are. If we go back to history, we look at countries like China. When Mao Tse-Tung came, he brought the cultural revolution and asked the Chinese people to go back to the rural areas to revisit the history. This is what gave China the strength that they are riding on today. We as Africans, we need to revisit where our culture, where our ancestors are,” said Ambassador Mwana Nanga.

Ambassador Mwana Nanga called upon the Zimbabwean youth to embrace their culture.

“My call to young Zimbabweans is to never forget your roots. You have taken your land back, go back to the rural areas and get the strength from our ancestors. That’s what we ride on to achieve greater heights,” he said.

“As a continent we are celebrating Africa Day. Mbuya Nehanda is our national icon and we really applaud the President for a very insightful vision in recognising our heroes and heroines. Government has plans to unveil more of these monuments. It is very important especially for young people to have a background and an understanding of where we come from as a country, where we are going because some of the problems we have today in the country we have young people who do not value the history of the country and our heritage,” he said.

Zanu PF Secretary for Finance and Economic Development Cde Patrick Chinamasa described the unveiling of the Mbuya Nehanda statue as an epochal event to mark our victory as a people against colonialism, imperialism and neo-colonialism.

He said that the unveiling of the statue traces and recognises the long journey that has been travelled since the subjugation of the people.

“It is a very important event and is also very important for Africa because it has been celebrated on Africa Day. As you know the African union played a pivotal role in the colonial liberation wars that took place against colonialism. We are very grateful that His Excellency President Mnangagwa has thought it wise to institute this monument. It preserves our history, it preserves our unity as a people,” said Cde Chinamasa.

A 26-year-old youth who graced the occasion, Gabriel Togarepi, commended President Mnangagwa for initiating the construction of the statue.

“This is so important especially for us the youth that we might be able to trace back our history, to know where we are coming from, know where we are going, so that we might be able to tell our children our history. It’s important to know that the past is our inheritance, the present is our responsibility, the future is our challenge,” said Togarepi.

Deputy Minister of Mines and Mining Development Mr Polite Kambamura said the unveiling of the statue of Mbuya Nehanda is important to trace back the history of the Zimbabwe.

“People are flocking to have a grasp of the image of Mbuya Nehanda. What we are seeing today is a true testimony that we have not forgotten our history. The coming generations will continue to appreciate the heroic acts what were done by Mbuya Nehanda. So we are so grateful to the President for coming up with this initiative,” he said.

One of the decorated female war veterans, Mashonaland East Minister of State for Provincial Affairs and Devolution Apollonia Munzwerengwi chronicled the role played by the spirit mediums during the liberation struggle.

“We were guided by the spirit of Mbuya Nehanda and others to liberate this country, so we need to give enough respect to our ancestors. We need to preserve our culture,” she said.

Africa Day is the annual commemoration of May 25, 1963, the day the African Union was founded.