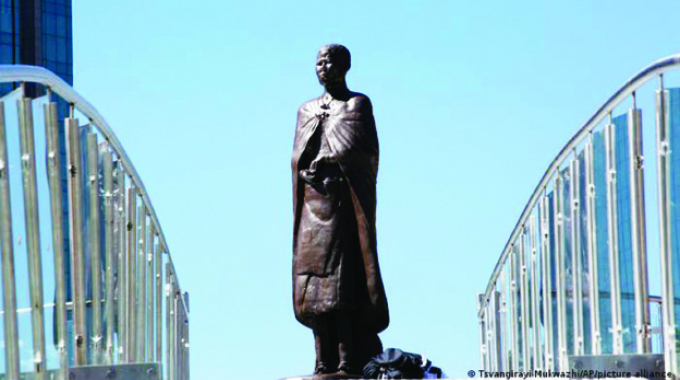 The structural steel for the bridge on Mbuya Nehanda’s statue consists of 58 tonnes of steel, 480 cubic metres of premix concrete, 450 panels of glass and about 58 000 stone bricks.

In a befitting honour, President Mnangagwa marked Africa Day by unveiling the statue of 19th Century warrior woman and anti-colonialist — Nehanda Charwe Nyakasikana, who was commonly known as Mbuya Nehanda. She was a powerful spirit medium and heroine of the First Chimurenga war against British colonial settlers in the 1890s. In this report, our Agric, Environment & Innovations Editor Sifelani Tsiko (ST) speaks to the lead architect and project manager Tapiwa Chiwara (TC) on  the statue.

ST: The unveiling of Mbuya Nehanda Memorial Monument is a testimony of your hard work and that of the construction teams that worked round the clock to complete the monument of the influential spirit medium who rallied people to fight against land seizures by colonialists. How do you feel about this achievement?

TC: Architects are dreamers who translate what is in their mind onto a piece of paper. Realising that an idea that was conceptualised in the mind was transformed into a complete physical piece makes me feel on top of the world and brings a sense of pride and confidence in my work and the team which worked hard on the project which consisted of bonafide Zimbabwean skilled youths, majority of which are under the age of 40.

ST: Can you tell us the names of the lead team of this construction project. Give full names and designation

The assembling of the rotating platform was done by Kinotec Engineering and Equipment with Godfrey Mabvurwi as the mechanical engineer.

ST: How would you describe the work done by this lead team? How did you work and coordinate your efforts?

TC: As the Architect of the project, I’m impressed in terms of how amazing conceptualised works came together element by element flowing into one harmonic piece of art by different players.

ST: What influenced you and your team to come up with the memorial structure of such a nature? How can you describe the design in simple language for our readers?

TC: Since as an architect through my research, Mbuya Nehanda said: “Mapfupa angu achamuka,” that became the bedrock of my thoughts. In brief, I idealised her spirit being immortalised by being buoyant, lifted in the air.

The design is symbolic of an arisen spirit (mapfupa) from the ground. The design was also site responsive since there was a need to minimise traffic on the busy intersection of Samora Machel and Julius Nyerere.

This was achieved by placing the statue on an elevated platform accessed by suspended pedestrian flyover bridges which lead up to the Statue. The bridges have a clear span of over 40 metres.

ST: What kind of materials were used to build the monument? What is the quantity of steel, cement and other special kinds of materials that were used?

TC: The monument was built using steel, cobblestone concrete and glass. To be specific, we used reinforcement steel of about 45 tonnes, structural steel for the bridge — 58 tonnes, premix concrete —480 cubic metres, glass — 450 panels and about 58 000 stone bricks.

ST: What was the total cost of the whole project?

ST: How long did it take you and the project team to complete this project?

TC: The initial contract period was two months, however, due to the discovery of underground services and Covid-19 related challenges the project ended up being extended to 11 months.

ST: Can you shed light about the unique features of this architectural work — the rotating component of this monument, how it works and other special features?

TC: It is called the electronic rotating platform. Its capacity is two tonnes and its maximum rotating speed is one complete revolution per hour and it uses a programmable logic controller which ensures that the equipment can be turned off and on automatically at specific intervals to the specifications of the client.

We are able to achieve any turning speed to the discretion of the client.

ST: What do some of the unique features of the monument symbolise?

This resembles the native black resistance against colonialism to date. The steel trusses are laid in a chevron pattern which was again adopted from the Great Zimbabwe Monument and represents and honours the ingenuity of our ancestors.

ST: What can you say about the maintenance requirements and both the endurance and durability of the structure?

TC: The materials used in the design are maintenance free and timeless. Firstly, the statue is made of bronze, a timeless material.

The structure consists of galvanized steel and concrete which are very durable and weather proof materials. The glass is a 12.4mm thick glass panel which is break-proof.

Lastly, the cladding consists of granite and cobblestone which is also maintenance free and durable.

ST: The monument was created to be a place of reflection for Zimbabwe’s historical heritage. What can you say about this and how does the monument fit into the capital city’s architectural landscape?

TC: The monument transcends the era from the times of bondage by the settlers and the protracted wars of Chimurenga that followed and the post-independence era to date. The monument is shouting of historical heritage into the current generations and future generations. It emboldens the soul of nationalism in the city scape.

ST: The intersection at which the monument was built is a busy spot. Critics say a peaceful isolated space within nature could have been better. What is your comment on this?

TC: The site has got historical significance since this was the area in which Mbuya Nehanda used to drink water and rest at the springs (chitubu) that were originally there. The City Presbyterian Church today stands at Mbuya Nehanda’s source of water.

This is close to the statue. Therefore, placing the monument at this particular site signifies the spirit of the place — genius loci.

ST: How secure will visitors be to this monument given the volume of traffic that passes through it?

TC: By placing the Monument on an elevated stage accessed by pedestrian flyover steel bridges with the threat of vehicular movement passing underneath, visitors will be safe. The traffic lights around the intersection were also upgraded to control both vehicular and pedestrian movement which also have back-up of solar to prevent any interruption in power.

ST: This monument in many ways is an attempt to find an appropriate way to preserve the memory of the past. It creates an intimate and inspiring public space that captures the history of our country. How do you feel about it? What are your hopes about this monument and the future?

TC: Every element of the monument is an experience. As you walk up you experience a feeling of being elevated from the ground gradually to the centre of the structure, casting eyes and thoughts into the air as you experience the city scape. Finally, one gets to connect with the historical heritage of the statue.