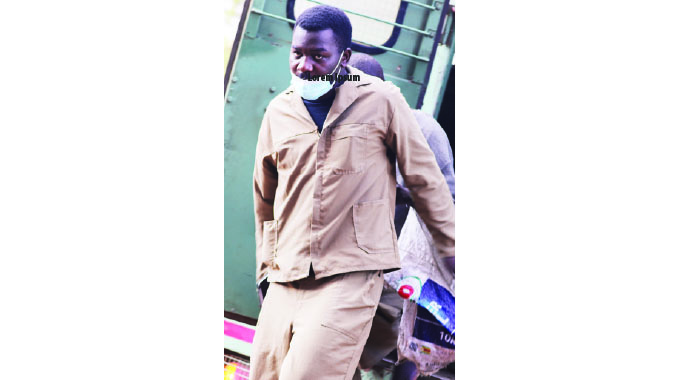 MDC-Alliance member Makomborero Haruzivishe was jailed yesterday for an effective 14 months on charges of incitement to public violence and of stoning police officers in central Harare during February last year when police were arresting illegal vendors.

Harare magistrate Mrs Judith Taruvinga sentenced him to 24 months in jail for incitement to cause public violence but suspended 10 months on condition of good behaviour.

She imposed a 12-month-term on the charge of resisting a police officer, a charge arising from throwing stones at a constable but suspended six months on condition of good behaviour.

She ruled the sentences should be served concurrently, so the longer effective term, the 14 months for incitement, becomes the total effective term.

In argument before sentence was passed, prosecutor Mr Moses Mapanga told the court that although it is every citizen’s right to demonstrate, such conduct should be peaceful.

He argued for a custodial sentence, whose actions he said were aggravated by the stoning of law enforcement agents who were on duty during the time he demonstrated.

“When the crime of public violence is committed, there is a possibility of property destruction and loss of lives to innocent people, which has been experienced before.

“It is also noted that the violence was perpetrated on law enforcement agents and which means his blameworthiness is very high.

Defence lawyer Mr Kossam Ncube argued for a non-custodial sentence saying it was difficult to assess the degree of violence Haruzivishe caused.

Haruzivishe had denied the charges during the trial, saying the police had provoked him by snatching his phone as he walked along First Street Mall near his party’s headquarters.

He said one policeman shouted: “We know you MDC members, you are troublesome.”

The State proved that on February 5 last year at around 10.30am at corner First Street Mall and Nelson Mandela Avenue, Constable Rayson Davison was on patrol with other officers arresting vendors in the city centre.

Cst Davison tried to arrest Haruzivishe, but he became violent. He was later subdued and arrested.