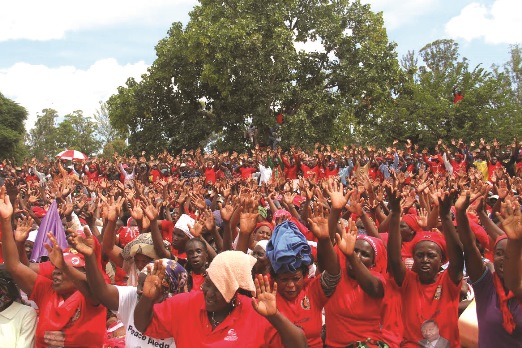 MUTARE – MDC Alliance yesterday pulled the biggest crowd in Mutare since its formation by packing Sakubva Stadium to the rafters, with close to 20 000 supporters turning up.

Nelson Chamisa said in his stump speech they had to turn way some people to allow the programme to commence without disturbances.

With the terraces packed, more people were channelled onto the pitch but the gates had to be shut to allow the programme to go on without risking crowd trouble.

“What overwhelmed me today is that from the formation of the party, we have never addressed such a packed stadium such that we start the programme with people still streaming in.

“I’m told the gates had to be closed. I wish my father and mentor . . . Morgan Richard Tsvangirai was here. It’s sad that he did not live to witness this although he is the one who set us up to this day…

“You did something that is amazing…I know we did not bring anyone from outside Mutare. I went to Chipinge, Chimanimani, Mutasa DC and Hauna. The people I saw there showed me that Zanu PF is the former ruling party and we are the ruling party,” Chamisa said.

“I want to thank you for this statement you have made today. I’ve come here many times with (the late) president Tsvangirai but this is the biggest statement ever,” Biti said.

Biti said this was a clear message to the ruling party that the people were fed up with it.

“It’s a statement against authoritarianism, against joblessness, against poverty…everywhere we have gone Zimbabwe is sending out a loud and clear statement that it no longer wants Zanu PF,” Biti said.

The People’s Democratic Party leader said Zanu PF was now in panic mode after seeing the mammoth crowds and alleged it was now attempting to manipulate the electoral process.

Biti said he would once again announce the election results on August 1 — a crime he was arrested for in the 2008 poll when he declared the late MDC leader Tsvangirai the winner.

During his own address, Chamisa queried the ballot printing. Zec completed printing presidential ballots on Wednesday, with postal voting now under way.

“We are not sure if the ballot papers were printed in Zimbabwe. We do not have any evidence that they were printed here.

“We feel it’s the ghost ballot papers that we are not in agreement with. We will not agree to go for an election under such circumstances,” Chamisa said as the opposition digs in.

The opposition leader said the Zanu PF administration was gambling with the notion that it had the backing of the military, saying it faced the spectre of fierce resistance from an angry populace.

“He should know that the youth of this country will not tolerate any nonsense. I’m going to be leading them.

“Any funny thing to rig the election; we are going to announce a programme next week. We are going to resist any attempt to rig an election in Zimbabwe,” Chamisa said.
He said his party was not going to be cheated and would secure consensus on the electoral process first.

He scoffed at criticism being levelled against him over his youthful age saying what mattered was his vision and not his age.

“They do not understand where we are going and their mistake is to talk about my age. What matters is not my age, but the depth of my vision,” he said.