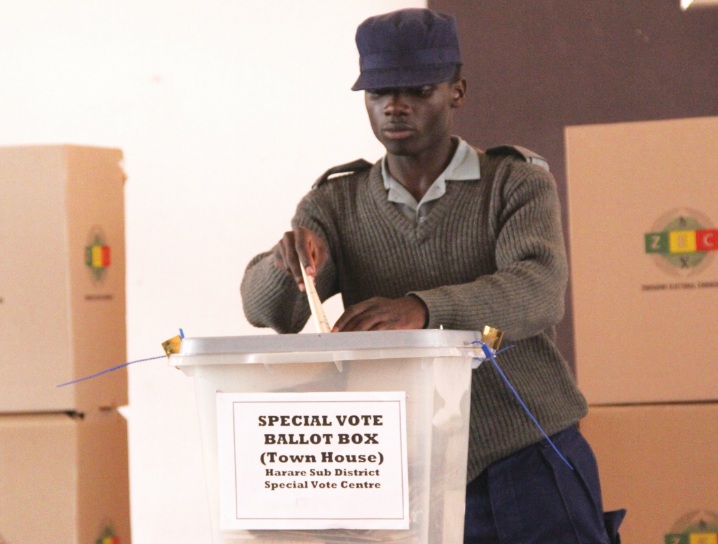 BULAWAYO – MDC Alliance officials spent a night at the Zimbabwe Republic Police (ZRP) headquarters at Ross Camp here in a bid to thwart police officers from casting their votes.

Top MDC Alliance official Gideon Shoko, one of those who laid an all-night vigil at the camp, alongside provincial chair Gift Banda, Bulawayo central legislator Dorcas Sibanda, told journalists that they had to stop by any means necessary possible rigging.

Posted voting was stopped on Thursday afternoon after opposition activists and domestic observers stormed the polling station, confronted the police over the process, which they described as illegal.

Since then, the MDC officials have refused to vacate the polling station. Police officers who were queuing immediately disappeared from the scene.

“I slept here with some of the members because we were watching over the ballots that had already been voted because we didn’t want them to temper with everything so we kept a vigil overnight,” Shoko said.

He said they were still in the process of finding the way forward on the matter which they said was threatening the credibility of the elections due in a fortnight.

“We are trying to engage the police administration so that they don’t set up a polling station here. If they want to deal with that issue, the way forward would be calling all the police officers and give them their envelopes and disperse and do whatever they want to do with the ballot papers,” Shoko said.

“It’s a very difficult situation. We will hear what they want to do with those ballots. To us, those ballots were not cast freely and from a layman’s point of view, those ballots should be declared null and void because they were not done on a free basis but under a hostile set up.”

Shoko further noted that from the information they have gathered, there was confusion between the Zimbabwe Electoral Commission (Zec) officials in Bulawayo and its head office.

“From the information that we got, it’s the Zec that is in Harare not the one in Bulawayo that had sent these ballot papers,” he said.

Meanwhile, there was tension at the Ross Camp, as anti-riot police was called to disperse the MDC Alliance activists who stood their ground, refusing to leave.

The police later drove the MDC Alliance activists out of the Ross Camp premises to allow the voting process to proceed unhindered. However, the disgruntled activists demonstrated outside Ross Camp against what they termed clear rigging by the Emmerson Mnangagwa-led government.

Banda said they later had an engagement with the police.

“What is happening now is that they (police) are now following due proper processes where police officers are no longer casting their ballots in front of their seniors,” he said.