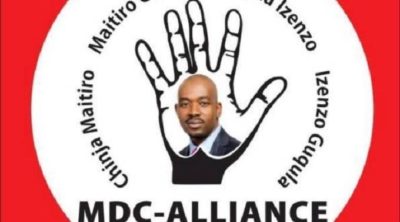 THE main opposition MDC Alliance yesterday said it was confident of retaining the Gwanda mayoral seat although stakes favoured its rivals, Zanu PF and MDC-T.

MDC Alliance has five councillors in Gwanda after the recall of Mazhale, while Zanu PF has four.

“We are very confident of retaining the mayorship of Gwanda for MDC Alliance because we still have a numerical advantage over Zanu PF even after the Khupe cabal recalled mayor Jastone Mazhale. We have five councillors while Zanu PF has only four,” he said.

“We have agreed on a candidate as a party that our councillors will vote for, but for strategic reasons, we have decided not to reveal his/her identity until the right time.”

Sources yesterday said MDC Alliance councillors had entered into a pact where they would back a Zanu PF candidate for the mayor’s post, with Chamisa’s party taking the deputy mayor’s post.

“MDC-T is likely to field ward 5 councillor Gilbert Dube for mayor, keeping ward 6 councillor Ponalo Maphala as deputy mayor (a position he is currently holding). The Chamisa group is also likely to back Zanu PF ward 3 councillor Knowledge Ndlovu for the mayorship in exchange for Zanu backing them for the deputy mayor in the form of ward 4 councillor Njabulo Siziba,” the source said.

Ndlela confirmed that Zanu PF officials had approached them for a horse-trading deal.

“It’s true Zanu PF has approached some of our councillors and offered them bribes, that is why we are dealing with this whole issue so strategically. All the five councillors remain unmoved under MDC Alliance. But Khupe people keep threatening them with recall.”

“We will be meeting with our councillors this week. As for Chamisa’s councillors supporting a Zanu PF candidate, I have no comment. I will leave it to the people of Gwanda.We will cross the bridge when we get there, but of course we hope to win,” he said.

A source said the elections were tricky for Chamisa’s camp since two of his remaining five councillors were reportedly aligned to
Khupe.

“If the MDC factions don’t unite, they will split votes and give the mayoral seat to Zanu PF,“ an MDC insider said.