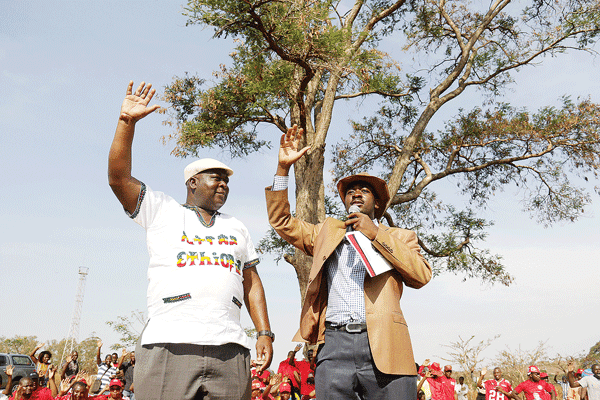 THE internal power struggles rocking the opposition MDC party led by Nelson Chamisa exploded at the weekend with the dissolution of two external structures of the party, NewsDay has learnt.

A national executive committee meeting set for Friday was reportedly abandoned after members boycotted in anger over attempts to expel deputy president Elias Mudzuri.
Sources said the meeting was then moved to Saturday where it was held concurrently with the national council.

“The agenda was to fire Mudzuri, but this failed because members of the national executive stayed away. In fact, at the time the meeting was supposed to start only one member outside the standing committee, Gilbert Shoko from Bulawayo, was there,” an insider told NewsDay.

“The national council itself had problems with numbers, because we had to rely on apologies to get a quorum. Still, the open hostility towards the push for Mudzuri’s ouster was so real that the issue was never brought for a vote in the national council.”

While Mudzuri seems to have survived the chop, at least for now, Chamisa’s supporters reportedly ring-fenced the 40-year-old leader against possible challenge at the party’s forthcoming congress scheduled for next year. The MDC’s United Kingdom chairperson, Tonderai Samanyanga, reportedly circulated a WhatsApp message criticising Chamisa, drawing the ire of the party leader’s acolytes.

“The UK and United States provinces were subsequently dissolved and for the former, it is because its chairman Samanyanga criticised ‘chef’ (Chamisa). The party also moved to adopt a social media policy on Saturday to curtail the incessant onslaught on the president ahead of congress. It’s a way of stemming the tide, as it were,” said the source.

Party spokesperson Jacob Mafume, however, denied Mudzuri’s issue was ever on the agenda.

“Yes, we moved the national executive meeting to Saturday and held it at the same time as the national council, but not because of numbers. The standing committee meeting held on Friday took too long, and we wanted to allow people to attend the presidential Christmas dinner,” Mafume told NewsDay.

He added: “The Mudzuri issue is a footnote in the greater scheme of things. Zimbabweans are struggling to make ends meet. They don’t know what tomorrow may bring, and we cannot, as a party that has people at heart, be transfixed with one person.

Mafume also confirmed that two external provinces had, indeed, been dissolved. He, however, said this was an “administrative issue”.

“It’s not political, but an administrative issue. There are things that happened pre-election and gaps had arisen, so we want to give the districts in those provinces the chance to re-configure their structures,” he added.

“The Samanyanga issue is an individual case which would be dealt with through a proper disciplinary procedure. We cannot punish two structures for the sins of one man. The two are not at all connected.”

According to sources, the social media policy will bar party members from “discussing party issues on such platforms; criticising party leadership, posting tribal and racist comments as well as off-colour comments.”

Chamisa, it has been learnt, has also tried to stop his supporters from pushing through with the national council vote to expel Mudzuri and previously secretary-general Mwonzora “because he is scared of a counter vote”.

“If he pushes for the vote and fails, then there is a real possibility that if the numbers are two-thirds against the motion to expel either Mudzuri or Mwonzora, this could immediately be turned against him. Someone could just stand up and call for a vote to remove the president. That is a distinct possibility,” said another source.

But Chamisa’s supporters argue that he is not scared of being challenged at congress.

“Mwonzora and Mudzuri will not upstage Chamisa. It’s impossible, but there are people who support Chamisa, and want to use him to get rid of the two because they see them as their rivals. They want to create space for themselves. Chamisa is aware of this, because this is a game he played very well under [founding leader] the late [Morgan] Tsvangirai,” a source close to Chamisa claimed.

Mudzuri was booed during an anti-government protest march last month after it emerged he attended a parliamentary function hosted by President Emmerson Mnangagwa at State House. Mudzuri and Mwonzora also stand accused of “apologising” to Chief Justice Luke Malaba following the top judge’s humiliation at the hands of opposition MPs at the official opening of Parliament in September, without Chamisa’s approval.

The MDC is set to hold an elective congress next year, with some demanding that it be held in March. But Mafume has previously said the congress was due in October.